The British Tory leadership debate between Prime Ministerial hopefuls Liz Truss and Rishi Sunak had to be halted mid-broadcast after a loud crashing noise was heard on set.

As you can see in the clip below taken from TalkTV's broadcast footage, Truss looked visibly distressed as the crash can be heard offscreen.

The camera then began to move and Truss walked out of frame.

Erm. I’m not sure what has just happened on Talk Tv, but I’m assuming somebody has collapsed as Liz Truss was mid sentence. 😳 #LeadershipDebate #TalkTV #Ready4Rishi #NeverRishi #Liz4Leader #LizForLeader pic.twitter.com/CMt6dv8jOS

While it was not immediately known what the issue was that caused the crash and for the debate to be put on hold, TalkTV later confirmed that presenter Kate McCann fainted on set.

"Kate McCann fainted on air tonight and although she is fine, the medical advice was that we shouldn't continue with the debate," the channel wrote on Twitter.

"We apologise to our viewers and listeners."

Kate McCann fainted on air tonight and although she is fine, the medical advice was that we shouldn't continue with the debate. We apologise to our viewers and listeners. 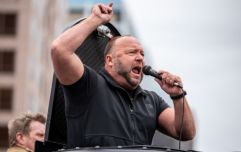 END_OF_DOCUMENT_TOKEN_TO_BE_REPLACED

The sudden collapse occurred during Sunak and Truss' second head-to-head debate which was entitled "The Fight for No 10".

Industry figures and political peers took to social media to send their best wishes to McCann, stating that she was doing a "brilliant job" hosting the debate prior to the medical emergency.

Hope @KateEMcCann is ok. She was doing a brilliant job. Get well soon!

Thoughts with the great Kate McCann, who was bossing the debate as expected. I am hearing that she is doing ok.

popular
Nearly 100 flights delayed at Dublin Airport on Monday
The Resort is the new must-watch for fans of big murder mysteries
Family of Ashling Murphy share heartbreaking tribute at Fleadh Cheoil
QUIZ: Can you get top marks in this short but tricky Irish geography quiz?
The 50 most iconic songs of all time* have been revealed
3 simple ways to help the men in your life open up, according to an Irish therapist
4-year-old girl killed in Sligo caravan park named as Alice Dunleavy
You may also like
4 days ago
Oil and gas companies making record profits during energy crisis is "immoral", says UN Chief
6 days ago
Irish CNN journalist Donie O'Sullivan has car stolen as part of weirdly specific online challenge
6 days ago
Unsealed court documents allege Johnny Depp suffered from erectile dysfunction
6 days ago
Osama Bin Laden's successor killed in US drone strike
1 week ago
Pope Francis says he may need to cut back his amount of travelling or retire
1 week ago
Taylor Swift responds after report claims she has the highest celebrity private jet emissions
Next Page