People are being urged to stay home and do as little as possible.

The UK is set to experience record-breaking temperatures this week, with the mercury potentially reaching 41C (106F) in some areas.

The Met Office has issued a red extreme heat warning for Monday and Tuesday across much of England. 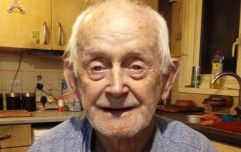 END_OF_DOCUMENT_TOKEN_TO_BE_REPLACED

Brits are being urged to stay at home and not travel as a result of the heat, with many businesses set to close over the two days and hospitals having to cancel appointments.

Met Office meteorologist, Steve Keates, told the Mirror that people should "do as little as possible" and that temperatures at night could still be a "horrible" 30C.

The chief executive of the College of Paramedics has warned the heat will be "ferocious" and that people could die as a result of the temperatures.

Tracy Nicholls told Sky News: "This isn't like a lovely hot day where we can put a bit of sunscreen on, go out and enjoy a swim and a meal outside.

"This is serious heat that could actually, ultimately, end in people's deaths because it is so ferocious. We're just not set up for that sort of heat in this country."

"This is serious heat."

Tracy Nicholls, from the College of Paramedics, says people should 'pay attention to vulnerable people' during the heatwave and gives her advice on keeping safe. #Ridge: https://t.co/ZoMhCmTrtv

It is likely that England will experience the hottest temperature ever recorded in the UK over the coming days.

END_OF_DOCUMENT_TOKEN_TO_BE_REPLACED

The current highest temperature in the UK is 38.7C, which was recorded in Cambridge in 2019.

But places such as Sheffield are predicted to hit 40C at the start of the week.

On Monday, London will be one of the hottest places in the world, and is set to be hotter than the Western Sahara and the Caribbean, the BBC reports.

The Met Office, meanwhile, has warned that the heat will likely lead to travel disruption and presents a threat to life.

Network Rail has said that people should only travel " "if absolutely necessary" on Monday and Tuesday".

A number of services have already been cancelled and a speed restriction is in place across the network.

The UK Health Security Agency has issued a level four warning for England, meaning the the weather is being treated as a "national emergency".

And the government chaired an emergency Cobra meeting for ministers on Saturday to prepare for the weather.

You can find out more about the extreme weather warning, what it means and what you can do to deal with the heat here.

Listen again
👇
Tips on staying safe in the heat
👇 https://t.co/lk1sqPoogo