An American politician named Lucy Flores has claimed that Joe Biden inappropriately touched and kissed her a political event.

Flores, who was running for Lieutenant Governor of Nevada at the time of the alleged incident, wrote about the experience in The Cut.

She wrote: "As I was taking deep breaths and preparing myself to make my case to the crowd, I felt two hands on my shoulders. I froze. “Why is the vice-president of the United States touching me?” 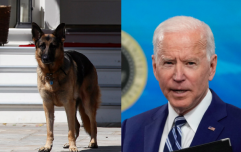 END_OF_DOCUMENT_TOKEN_TO_BE_REPLACED

"He proceeded to plant a big slow kiss on the back of my head. My brain couldn’t process what was happening. I was embarrassed. I was shocked. I was confused. There is a Spanish saying, “tragame tierra,” it means, 'earth, swallow me whole.'"

Biden, who is now 76 years old, is at the centre of rampant speculation that he might enter the Democratic primaries in an attempt to take on Donald Trump in the 2020 election. He served as Vice President under Barack Obama for eight years.

If he were to do so, it is likely that he would be a frontrunner, though it remains unclear whether this story will affect his popularity.

The Big Reviewski || JOE · TBR Spotlight: The Falcon and the Winter Soldier Episode Five - 'Truth'
popular
The 50 most iconic songs of all time* have been revealed
QUIZ: Can you answer all of Sinead and Daniel's questions on the Irish Celebrity Who Wants to be a Millionaire?
People think they've figured out the ranking of the viewers on your Instagram Stories
PICS: The man with the biggest penis in the world has one unbelievable problem with it
QUIZ: You'll find it hard to name all these towns from their Irish name (part 2)
The JOE Friday Pub Quiz: Week 239
The JOE Music Quiz: Week 53
You may also like
3 weeks ago
Joe Biden says his ancestors left Ireland "because of what the Brits had been doing"
3 weeks ago
Joe Biden allocates $86 million to rehouse migrant families in hotels
1 month ago
President Biden pledges support for Good Friday Agreement ahead of Taoiseach meeting
1 month ago
Leaders around the world send Ireland their St Patrick's Day greetings
1 month ago
Joe Biden's dogs sent from White House back to Delaware following "biting incident"
1 month ago
Joe Biden maintains "unequivocal" support for Good Friday Agreement
Next Page