We could all probably use one of these.

We've all spent a bit too much time on the internet, on box-sets binges or playing video games, but for some Japanese youngsters it goes as far as dropping out of school to spend all their time online. 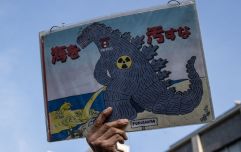 END_OF_DOCUMENT_TOKEN_TO_BE_REPLACED

Having trouble sleeping is another common issue with the Japanese Government saying 500,000 people are addicted to the internet.

As a result, digital detox centres, sponsored by the government, have become a common facility for people who are encouraged to leave their devices at the door and spend time away from the internet.

Any excuse to skip school...

The Big Reviewski || JOE · TBR Spotlight: Loki - Episode Two - 'The Variant'
popular
There are four big movies arriving in Irish cinemas this week
Simon Harris says colleges to offer online learning alternatives after September reopening
Simon Harris says Ireland is "just about ahead" in race between Delta variant and vaccines
Teenager arrested after pointing gun at woman and pulling trigger during attempted robbery in Drogheda
Matt LeBlanc has seen the memes of him as every Irish auld lad and very much enjoyed them
The 50 most iconic songs of all time* have been revealed
PICS: The man with the biggest penis in the world has one unbelievable problem with it
You may also like
2 months ago
Super Nintendo World is officially open
1 year ago
Fire destroys large parts of Shuri castle in Japan as blaze engulfs the beloved world heritage site
1 year ago
Nine tips for any rugby fans heading over to Japan for the knock outs
1 year ago
At least 33 people killed by Typhoon Hagibis in Japan
1 year ago
Galwegians! Fancy hopping into a sumo suit this weekend?
1 year ago
Calling all Belfast people! Up for a bit of sumo wrestling?
Next Page