Thanks to a technical glitch that occurred on the Aussie news station WIN during the week, a newsreader was left warning viewers that she was ‘going to sound like a drunk’.

The WIN news presenter Kerryn Johnston was left feeling a little red-faced yesterday after a late night broadcast, which aired at 12am on Wednesday night, featured the newscaster saying, “Good evening. Tonight I’m going to sound like a drunk”. Take a look… 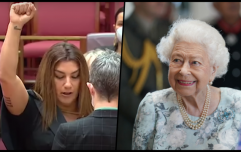 END_OF_DOCUMENT_TOKEN_TO_BE_REPLACED

In fairness to Kerryn, she didn’t say it on live TV. The footage that was aired at midnight was from a pre-recorded rehearsal for the 6.30pm news, but the editors obviously cut the recording in the wrong place and included Kerryn’s ‘drunk’ statement.

The WIN Network's Director of News Stewart Richmond said, “This is a newsreader who sets a very high standard for herself. To have it go to air when it was not intended to has been more than embarrassing for her.

"Kerryn has been presenting news for over two decades and has never put a foot wrong.  I'm sure our viewers will understand."

popular
Welder awarded €15,000 for unfair dismissal despite admitting to drinking alcohol before work
Netflix has just quietly added 30 big movies to its library
10 years ago today, the scariest movie ever made (according to science) was released
One woman dead and four injured after separate crashes in Clare and Mayo
Amazon Prime Video has just added 37 big movies to its library
Netflix reveals full line-up of new shows and movies arriving in October
Man in his 40s dies following assault at funeral in Kerry
You may also like
2 months ago
5,000 jobs in Australia for Irish workers on offer at job fair next week
3 months ago
The JOE Friday Pub Quiz: Week 298
4 months ago
Irish teenager killed in two vehicle collision in Australia
5 months ago
Australia looks to tempt Irish working holidaymakers with €10 flights Down Under
7 months ago
After 37 years, Neighbours is officially coming to an end
7 months ago
British man killed by shark in Sydney's first fatal attack in almost 60 years
Next Page