It's hard to have sympathy for someone who does something so stupid.

Showing off his acrobatic talents down the Subway didn't go too well for this young fella recently when he ended up injured from a stunt.

This limber guy tried to jump across the Subway to his friend, but didn't quite manage to make the distance and ended up folding over the platform at the other side of the jump.

Watch it scene by scene here. 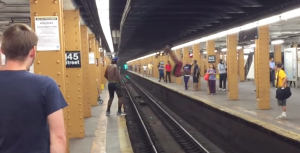 When his feet reach forward for the ground you realise this isn't going to end well. 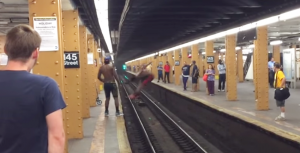 He finishes up folded over the corner of the platform. Ouch. 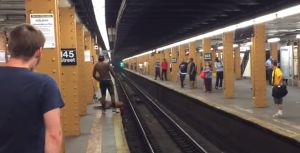 This guy is delighted with the mini entertainment show while waiting for his Subway train. 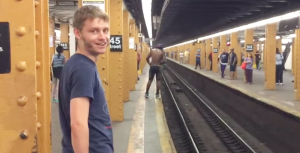 Hat-tip to the Irish Examiner and Clip via Lei Gong


popular
Met Éireann says there's a risk of snow for parts of Ireland this weekend
QUIZ: Can you guess the pixellated movie posters?
QUIZ: Can you name all these European countries just from their vowels?
Aldi to recruit 550 new staff and implement living wage rate for employees
Here are Ireland’s favourite takeaways, as per the National Takeaway Awards
Dublin pub to host a 'doggy date night' where you can bring your dog to dinner
Man dies after farming accident in Cork
You may also like
1 year ago
WATCH: Tipperary Dad tries VR for the first time... and the last time
1 year ago
If you want to buy an Idris Elba doll that looks nothing like Idris Elba, you're in luck
2 years ago
This has surely been the most viewed video in the world over the last couple of days
2 years ago
WATCH: Hilarious footage of two Irish skiers losing control in Italy [NSFW]
3 years ago
This guy got savagely mocked online for not knowing how maths works
3 years ago
Everton official store ruins fan's Christmas with Manchester United crest
Next Page