Video: Leitrim man gets emotional as his parents pay surprise visit to Australia for his 30th birthday

There's something in our eye lads.

So many Irish people make 'surprise' visits home from Australia these days that it's not really a surprise anymore.

It rarely happens the other way around, however, so Killian Maguire from Leitrim was genuinely taken aback when his parents made the long trek to Perth to surprise him on his 30th birthday. 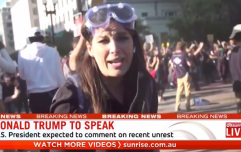 END_OF_DOCUMENT_TOKEN_TO_BE_REPLACED

Killian knew that another brother of his, Damon, who is currently living in Sydney, was flying to Perth to celebrate his 30th birthday and was waiting at the airport to collect him.

Damon, however, flew in the night before and stayed with friends, leaving Killian gobsmacked when his eldest brother Nathan showed up, having flown in from Ireland especially for the occasion.

If that wasn't enough, Nathan then brought Killian to meet his parents, John and Susan, who had also flown in and it was then that Killian got just a little bit emotional, understandably so.

This will ring home with anyone who is living from home or who has a family member living away from home and the way Ireland has been in the last few years, barely any family has been left untouched by emigration.

What a lovely moment.

Hat-tip to another member of the Maguire family who didn't make the trip, Cormac, for sending this one our way

popular
The JOE Friday Pub Quiz: Week 220
The JOE Movie Quiz: Week 80
Harry Styles hits back at critics who told him to be more 'manly'
The 50 most iconic songs of all time* have been revealed
Here's Week 58 of JOE's 19 in 90 quickfire quiz
Here are the 6 best movies on TV tonight
The JOE Music Quiz: Week 36
You may also like
8 months ago
Australian Prime Minister tells citizens to reconsider non-essential overseas travel
9 months ago
113 animal species require "urgent help" following Australian fires
10 months ago
Australian fire brigade post truly scary video of a bushfire spreading wildly in just three minutes
10 months ago
Three US firefighters die in Australia as water tanker plane crashes
10 months ago
Death toll of animals exceeds one billion as new bushfire and evacuation warnings issued in Australia
10 months ago
Instagram model raises over $500,000 for Australian bush fires by selling nudes
Next Page