An astonishing example of road rage in Dublin.

Filmed from the dashboard of Jason Murphy - who has given us permission to use the footage - this shows him and a stranger arguing while driving before things turn nasty. 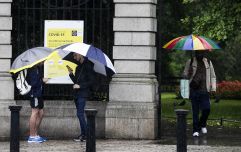 END_OF_DOCUMENT_TOKEN_TO_BE_REPLACED

The driver of the other car pulls over and confronts Jason, before pulling him out of his car and landing several punches on him.

Jason fights back and manages to subdue the stranger before onlookers and a plain clothes Garda arrive on the scene and intervene.

SportsJOE's Deputy Editor Mikey Stafford happened to be close by at the time of the incident, and revealed that the two men were shouting at each other for a good 30 seconds before things turned nasty.

popular
One of Keanu Reeves' best movies has just been added to Netflix
The JOE Movie Quiz: Week 131
A terrific crime thriller is among the movies on TV tonight
QUIZ: Do you reckon you can get 15/15 in this General Knowledge Quiz
QUIZ: Can you get full marks in this General Knowledge Quiz?
Daniel Craig's best pre-James Bond film is among the movies on TV tonight
The JOE Friday Pub Quiz: Week 272
You may also like
2 years ago
'Tailgating' revealed as most annoying driving habit amongst Irish motorists
6 years ago
VIDEO: This road rage video starring Ronnie Pickering is a new favourite of ours (NSFW)
6 years ago
Video: Biker fails badly at getting even with idiotic motorist
7 years ago
Video: Driver wrecks car following dangerous fit of parking space rage
7 years ago
Video: Road Raging motorcyclist gets his just deserts
7 years ago
Video: Ass-hat driver receives heavy dose of instant karma
Next Page