Video: The Tralee man with the most famous GAA jersey at the World Cup has made a video recounting his amazing experience

You might have had a decent summer so far, but it probably hasn’t been a patch on Mike Griffin’s.

If the name sounds familiar it should because Mike has been the focus of plenty of attention already this summer and has been something of a regular on these pages having travelled to Brazil for the World Cup and having fetched the signatures of some of the most famous names in football on a Na Gaeil GAA jersey he brought with him. 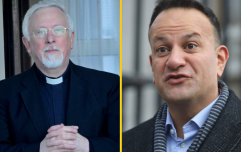 END_OF_DOCUMENT_TOKEN_TO_BE_REPLACED

Fabio Cannavaro, Diego Maradona, Martin O’Neill and Mesut Ozil – directly after winning the World Cup Final if you don’t mind – were just some of the high profile personalities to add their signatures to the jersey, which Mike will now generously auction off to raise funds for Cry (Cardiac Risk in the Young) Ireland, a very worthy cause.

Mike has made a brilliant video recounting his once in a lifetime experience in Brazil and if you weren’t already jealous from just hearing about his story and seeing the pictures, you will be after seeing this.

popular
Conor Mcgregor hit by car ‘at full speed’ while cycling
Parents left in shock after gorillas start mating in front of kids at zoo
Colin Farrell shouldn't win the Oscar this year
Harvard study reveals how many times men should ejaculate each month to stay healthy
DJ accidentally shoots herself in the face with a confetti cannon while performing
The JOE Friday Pub Quiz: Week 331
Netflix has just added one of the best sci-fi movies of recent years
You may also like
2 months ago
Teenage girl dies after single vehicle collision in Kerry
3 months ago
Man in his 20s dies in two-vehicle collision in Kerry
3 months ago
Man charged in connection with fatal stabbing attack at Kerry funeral
3 months ago
Second man arrested in connection with fatal assault at Kerry funeral
3 months ago
Man in his 40s dies following assault at funeral in Kerry
1 week ago
Ryanair announces recruitment drive to hire 200 more cabin crew members in Ireland
Next Page