The Garda was brought to St. James's Hospital.

Two men have been arrested following an incident in which a member of An Garda Síochána was injured in Dublin on Wednesday night.

Just before midnight, Gardaí had pursued a car from Cuffe Street to St Luke's Avenue after it had failed to stop.

A video was captured of the incident, and discussed on RTÉ's Liveline on Thursday afternoon. The footage appears to show one Garda being pulled along by the car as he is halfway through the window. Several other Gardaí then chase the car on the foot.

The video was shared on Twitter by Liveline host Joe Duffy.

A listener says this happened on Dublin’s Cork Street last night. Hope the poor Garda being dragged along by the car is ok. ⁦@GardaTraffic⁩ ⁦@DubFireBrigade⁩ ⁦@rteliveline⁩ 1850715815 pic.twitter.com/3PfWt4uhtE 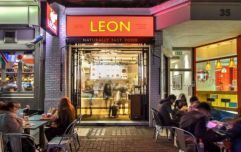 LEON to open its second Dublin restaurant in February

END_OF_DOCUMENT_TOKEN_TO_BE_REPLACED

A spokesperson for the Gardaí said: "After assistance from the Garda Air Support Unit, the two males were arrested and were detained at Kevin Street Garda Station under Section 4 of the Criminal Justice Act 1984. The Garda Member received minor injuries and was taken to St. James's Hospital where he was later released.

"A search of the prisoners also yielded a small quantity of suspected ecstasy tablets, suspected MDMA and drug paraphernalia. Investigations are ongoing."

The men arrested are believed to be in their 20s and 30s, respectively.


popular
QUIZ: Can you name all the Irish counties just by their shape?
Gardaí arrest woman (40s) in relation to the three children that were found dead in Dublin
PERSONALITY TEST: What percent tosser are you?
QUIZ: Can you match the Father Ted quote to the character that said it?
PERSONALITY TEST: Which Peaky Blinders character are you?
The JOE Movie Quiz: Week 38
QUIZ: Name the missing word from these famous Dumb and Dumber quotes
You may also like
1 day ago
Dublin to host a Taco Battle cook-off this February
3 days ago
Gardaí name the three children that were found dead in a Dublin home
3 days ago
Teenager hospitalised after stabbing incident on Portmarnock beach, Dublin
3 days ago
Teenager dies following collision on the Naas Road in Dublin
4 days ago
Bodies of three children discovered in Dublin home
5 days ago
Dublin pub to host a 'doggy date night' where you can bring your dog to dinner
Next Page