WATCH: The moment police stop a man driving the wrong way down a motorway

Inches away from total disaster.

A UK man was jailed for 18 months yesterday after he was caught driving the wrong way down the M4-Reading on 15 December, last year.

Footage from the scene shows the man's red van repeatedly coming close to smashing head first into several other vehicles. The footage also shows how a police car eventually got in front of him, forcing him to spin off and stop just before hitting the barrier.

Thankfully, nobody was injured in the nightmare incident.

A tweet from the Thames Valley Police read: "The skill & bravery of our officers stopped a potentially devastating road traffic incident."

The clip below is fairly heart-in-mouth stuff.

🚨 Man jailed for driving the wrong way down the M4-Reading 🚨

The skill & bravery of our officers stopped a potentially devastating road traffic incident.

Fortunately, no-one was injured but the incident is another reminder of the potential destruction of drink & drug driving pic.twitter.com/hjVvVCnaEa 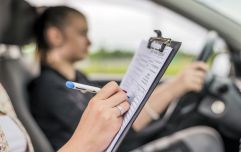 END_OF_DOCUMENT_TOKEN_TO_BE_REPLACED

popular
Amazon Prime Video has just added 37 big movies to its library
10 years ago today, the scariest movie ever made (according to science) was released
County where winning Lotto jackpot ticket worth nearly €9 million was sold confirmed
Welder awarded €15,000 for unfair dismissal despite admitting to drinking alcohol before work
Here's the line-up for this week's episode of The Late Late Show
Dublin Bus and boat involved in city centre collision
Netflix has just quietly added 30 big movies to its library
You may also like
1 month ago
COMPETITION: Here's how you can WIN €500 off your young driver car insurance with Allianz
4 months ago
Sleep deprived medical staff pose same danger on roads as drunk drivers, experts claim
5 months ago
Ireland's first motorway average speed camera system to begin operating next week
8 months ago
Almost 1,000 people arrested for drink-driving offences over Christmas
9 months ago
AA issues warning as schools set to reopen
9 months ago
Motorists may be asked to upload videos of bad driving on Irish roads
Next Page