Two separate status yellow wind warnings have now been issued, the first of which applies to Donegal, Galway and Mayo.

The warning description is as follows: "Southerly winds gradually veering westerly during Tuesday will reach mean speeds of 50 to 65km/h with gusts of 90 to 110km/h, strongest near coasts and about high ground."

The warning will take effect from 1am on Tuesday and will remain in place until 8pm on Tuesday evening. 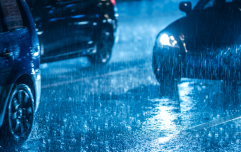 END_OF_DOCUMENT_TOKEN_TO_BE_REPLACED

The warning for those counties is as follows: "Southerly winds gradually veering westerly will reach mean speeds of 50 to 65km/h with gusts of 90 to 100km/h at times during Tuesday."

This warning kicks in at 6am on Tuesday and will also remain in place until 8pm on Tuesday evening.


popular
Gardaí launch investigation into four-lane motorway sulky race
Two men arrested in Keane Mulready-Woods murder investigation
Tayto have launched two brand new crisp flavours for you to get stuck into
Here are all the best new titles coming to Netflix in March
Army bomb squad called in over suspect device found in North Dublin
The story behind Netflix's latest true crime documentary is absolutely off-the-wall bonkers
It's Week 20 of JOE's 19 in 90 quickfire quiz
You may also like
3 days ago
Ciara and Dennis have left, but this week's weather is still pretty bad
3 days ago
New Status Yellow weather warning issued for nine counties in Ireland
4 days ago
An updated Status Yellow wind warning has been issued for the entire country
4 days ago
Met Éireann issues status orange wind warning for two counties as Storm Dennis arrives
5 days ago
Met Éireann warn of wet and windy weather with severe gusts as Storm Dennis arrives
5 days ago
Met Éireann issues update on timeline and potential flood warnings ahead of Storm Dennis
Next Page