The four pitch invaders who interrupted Sunday's World Cup final have been sentenced to 15 days in jail.

The protestors ran onto the pitch at the Luzhniki Stadium during the second-half of France vs Croatia before they were apprehended by security. 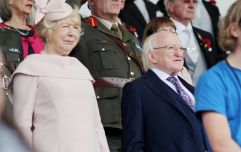 END_OF_DOCUMENT_TOKEN_TO_BE_REPLACED

President of Vladimir Putin was in attendance for the match, as was French president Emmanuel Macron and Croatian president Kolinda Grabar-Kitarović.

Members of the Pussy Riot group have been imprisoned by Russia before, most notably after a protest at a Moscow cathedral in 2012.

The group is vehemently anti-Putin, and has released a song titled 'Punk Prayer: Mother of God Drive Putin Away.'

popular
Anne Heche dies one week after car crash, aged 53
The JOE Friday Pub Quiz: Week 307
An exciting Irish crime thriller is among the movies on TV tonight
Record for hottest August day in Ireland ever has now been broken
Shooting stars set to light up Ireland's skies this weekend
A great underseen action thriller is among the movies on TV tonight
Thunderstorms and heavy rain to end Ireland's current heatwave
You may also like
2 weeks ago
Chess robot grabs and breaks finger of seven-year-old boy after he "violated rules"
1 month ago
Russia leaves Snake Island where guards told warship "go f*** yourself" months ago
1 month ago
WATCH: J.K Rowling tricked by Russians impersonating Zelensky on Zoom call
2 months ago
"Rocky" years ahead for consumer energy prices in wake of Russian oil ban, warns Taoiseach
2 months ago
Morgan Freeman has been banned from entering Russia
2 months ago
"We're not intimidating anyone" – Russian State TV fires back at Taoiseach's apology request
Next Page