The man, who is an alleged member of a violent white supremacist group, flew back to the US from Ireland on Wednesday.

Gardaí have confirmed that an alleged neo-nazi spent almost a week in Ireland after he was refused entry into Germany. Last week, German media reported that a man known as Kyle M had been stopped by authorities when he was getting off a flight from Dublin to Berlin last Thursday.

The man was questioned by police at Tegel Airport before being put back on a plane to Dublin that evening. The 31-year-old is an alleged member of Atomwaffen, a violent far-right group. Members of Atomwaffen have been linked with five murders and a number of terror threats in the US. 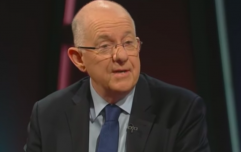 END_OF_DOCUMENT_TOKEN_TO_BE_REPLACED

It was reported that German police were tipped off by the FBI ahead of Kyle M's arrival. A spokeswoman for the FBI told JOE that it had no comment to make.

On Thursday, gardaí confirmed that the man had been in Ireland for a number of days and that he had returned to the US on Wednesday.

"An Garda Síochana are aware of a male US citizen who travelled from the US to Germany transiting Dublin and who was refused entry into Germany and returned to Dublin. This male has now returned to the US on 20/11/2019 from Dublin," it said in a statement.

The Department of Justice said it did not comment on individual cases.

popular
Netflix has just added one of the funniest shows of the last 10 years
Netflix has just added 12 very big movies to their library
Spielberg's best movie is among the movies on TV tonight
Police believe they know what happened to Nicola Bulley
The 50 most iconic songs of all time* have been revealed
The JOE Friday Pub Quiz: Week 332
QUIZ: Can you get 15/15 in this Irish general knowledge quiz?
You may also like
1 week ago
Three injured after fight breaks out at refugee centre in Dublin
1 week ago
Witness appeal launched after Garda seriously assaulted in Dublin
2 weeks ago
Investigation launched after burglary at Hugo Boss store on Grafton Street
4 weeks ago
Gardaí investigating after TDs claim bags of excrement were thrown at them
1 month ago
Man dies in unexplained circumstances in Cork
1 month ago
Woman assaulted during aggravated burglary in Kildare
Next Page