We can't see the horsemen yet, but we can hear the hooves.

Last week, all-time-high temperatures were recorded in several countries across Europe. Politically, chaos continues to engulf the British Isles. You'd be forgiven for thinking we're facing down armageddon on every front.

One man in particular is probably pretty happy about all of this.

On Wednesday, former Trump advisor and harbinger of doom Steve Bannon appeared on BBC's Radio 4 to give his thoughts on Brexit.

It was disturbing evidence that even the most serious institutions in Britain aren't taking Brexit seriously enough.

With just 92 days left to go before the UK crashes out of the European Union without a deal of any kind in place, the British state broadcaster is still amplifying all the wrong voices.

Asked for his thoughts, Bannon forecasted turmoil in a way that really seems like wishful thinking. That doesn't mean it's not true, mind. Turmoil may well be ahead. My point is simply that turmoil is exactly what Bannon is wishing for.

No deal is likely to mean food shortages. It's likely to mean an emergency in increased demand for medical supplies. It will certainly mean lost jobs and incalculable lost opportunity. Billions of pounds are being spent to prepare the British public for no deal. An air of inevitability now clings to the phrase "no deal."

"The British people have not seen even the beginning of the turmoil, I think the turmoil is about to start."

Bannon was not quite gleeful as he said the words, but he's nothing like a traditional political commentator. The gravity of lives on the line don't seem to weigh on his conscience.

He might be, after all, the only political force in the world who is openly pro-turmoil. 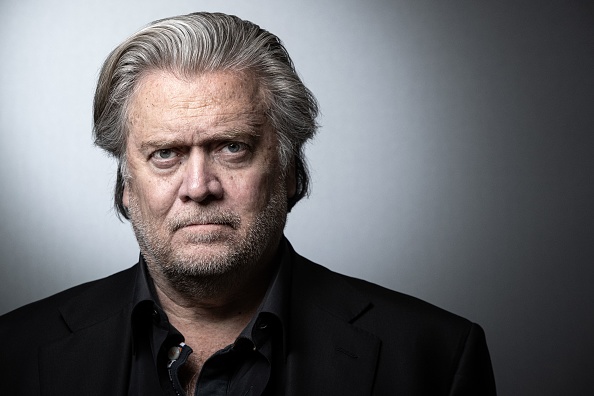 Yep, they actually went and made the Brexit commemorative coin

END_OF_DOCUMENT_TOKEN_TO_BE_REPLACED

"I've said from the beginning, no deal, hard out is the way to go," he told North America Editor Jon Sopel. He described the oncoming crisis as "not an obstacle to be overcome, but an opportunity to be grabbed."

These words expose the heart of Bannon's wider philosophy.

Before getting Trump elected, Bannon said of the US establishment: "I want to bring everything crashing down, and destroy all of today’s establishment." He has since espoused a desire to "drive a stake through the heart of the EU."

Rather than an impartial voice from across the sea, Bannon is an explicitly partisan actor with more skin in the game than most.

He has continued to foment far-right sentiment across Europe. Ahead of the 2019 European elections, he said: "Remember ‘Bannon’s theorem'. You put a reasonable face on right-wing populism, you get elected.”

Unchallenged, Bannon went on to say that "even people that are Remain people" see the 31 October deadline a hard date that must be adhered to. Something which is more than questionable, given that millions of people famously signed a petition pleading for a second referendum. The interview simply skips over this detail.

END_OF_DOCUMENT_TOKEN_TO_BE_REPLACED

Bannon's Irishness starts and ends with his last name and goes no further. In a 28-minute interview, Bannon paid no mind to the impact of a no-deal Brexit on the Good Friday Agreement, an issue inextricable from the outcome of the UK's blind leap from the EU. Sopel, the interviewer, did not raise the matter.

The purpose of Bannon's political life has been to sow discord in established democracies. He dreams of exploding the political order so that he can piece it back together in his own image.

Trump's victory in 2016 was his first major success, though he also certainly had a hand in Brexit. His friendship with Brexit Party leader Nigel Farage is something to which he clings dearly, and he used the interview to call for an alliance between Farage - whose party haven't got a single MP - and the Tory party.

Bannon didn't even need to defend himself from accusations that he is close with Boris Johnson. Asked by Sopel if he knew of Johnson's resignation from Foreign Secretary in advance, Bannon just laughed and said: "We'll go with what Boris says, we'll go with whatever the Prime Minister says. I'm good."

And that was the end of that line of questioning.

For the BBC to give credence, and respect, and time, to the views of someone like Bannon, whose own creed is one of chaos and destruction, is irresponsible to the point of being actively adversarial. To then treat that creed as simply the objective musings of a well-respected political strategist is a dereliction of journalistic duty.

Bannon is an agent of chaos, a friend to the architects of Brexit, and a man who has openly professed his violent desire to put an end to the EU. For the BBC to overlook this is a slap in the face to everyone in both the UK and Ireland.

On Wednesday, the Central Bank of Ireland forecasted that in the event of a no-deal Brexit, the Irish economy is looking at 110,000 job losses over a long period of time. There is no solution on the horizon to the issue of the hard border. Anglo-Irish relations have not been so fraught in decades.

Bannon is right about one thing: the turmoil is only about to start.


popular
PERSONALITY TEST: What percent tosser are you?
PERSONALITY TEST: Which Peaky Blinders character are you?
Gardaí arrest woman (40s) in relation to the three children that were found dead in Dublin
QUIZ: Can you name all the Irish counties just by their shape?
The JOE Movie Quiz: Week 38
QUIZ: Name the missing word from these famous Dumb and Dumber quotes
Tommy Tiernan's chat with James Leonard about addiction and recovery is genuinely life-changing
You may also like
3 weeks ago
British MP promises to end Troubles prosecutions for British soldiers, says there will be "blood on the carpet"
1 month ago
Nearly a million Irish passports issued in 2019
1 month ago
"Let's get Brexit done" - Boris Johnson celebrates UK General Election victory
1 month ago
UK General Election exit poll indicates emphatic Boris Johnson victory
1 month ago
Arlene Foster: Boris Johnson "broke his word" over Brexit and a border in the Irish Sea
1 month ago
WATCH: BBC presenter Andrew Neil calls out Boris Johnson for an interview in brilliant video
Next Page