The controversial mechanism was introduced to get Boris Johnson's "oven-ready' Brexit deal over the line.

Dominic Cummings, former chief adviser to Boris Johnson, has claimed that the UK Prime Minister never understood his Withdrawal Agreement with the EU until it was over the line.

Cummings, famous for “testing his eyesight” during the pandemic, says the UK government always planned to “ditch” parts of the deal they didn’t like after they’d “whacked Corbyn”.

END_OF_DOCUMENT_TOKEN_TO_BE_REPLACED

His intervention is timely. Lord Frost, the government’s chief Brexit negotiator, is currently in Lisbon attempting to rectify the shambles generated by Johnson’s deal.

Frost, speaking at the British embassy in Lisbon on Tuesday (12 October), said the UK government was looking to negotiate a new protocol – despite agreeing to the current one just two years ago.

No one in Brussels was amused, with one diplomat describing the speech as "patronising".

END_OF_DOCUMENT_TOKEN_TO_BE_REPLACED

Throughout the election campaign, Boris Johnson repeatedly promised his Brexit deal, including the Northern Ireland Protocol, was a “great deal” that was “oven-ready”.

Cummings wrote: “No what I’ve said does NOT mean 'the PM was lying in GE2019'

“He never had a scoobydoo [sic] what the deal he signed meant." 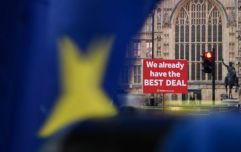 END_OF_DOCUMENT_TOKEN_TO_BE_REPLACED

The PM’s ex-advisor claims Johnson did not understand the deal until after he’d signed it.

“He never understood what leaving Customs Union meant until 11/20.”

Cummings added: “He was babbling ‘I’d never have signed it if I’d understood it’ (but that WAS a lie)”.

No what Ive said does NOT mean 'the PM was lying in GE2019', he never had a scoobydoo what the deal he signed meant. He never understood what leaving Customs Union meant until 11/20. In 1/20 he was babbling 'Id never have signed it if Id understood it' (but that WAS a lie)

popular
Simon Cowell concerns fans with appearance as they 'don't recognise him'
Junior doctor 'fell asleep' at the wheel after 12-hour shift then mowed down two women and two kids
An Oscar Best Picture winner is one of the movies on TV tonight
Starbucks worker breaks down in tears after they're scheduled to work 8 hours
Netflix has just added 30 big movies to its library
Woman left confused after DNA test shows child isn't husband's despite her claims that she never cheated
One of the best movies of the decade has just been added to Netflix
You may also like
1 week ago
Piers Morgan says it's "time to admit Brexit has been a disaster" and calls for second referendum
4 months ago
British PM candidate shares bizarre proposal to form alliance with "Viking parliaments", including Ireland
5 months ago
Coveney “hugely disappointed” by UK Government approach to NI Protocol
5 months ago
Coveney fires back at UK Government plans to change NI Protocol
6 months ago
Plan to suspend Northern Ireland Protocol reportedly "days away"
6 months ago
Mary Lou McDonald says UK Government "gamesmanship" over Northern Ireland Protocol won't be tolerated
Next Page