For the most part the debate was amicable enough, with candidates quizzes on whether they would refuse to meet foreign leaders, how much they've spent on their campaigns and what their priorities would be in office. 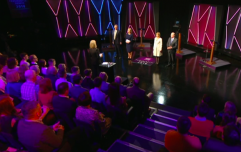 Why on earth does Ireland even have presidential debates?

END_OF_DOCUMENT_TOKEN_TO_BE_REPLACED

There was minimal cross-talk and very little acrimony between the candidates, with Peter Casey even saying he would appoint Joan Freeman onto his Council of State.

However, the meandering conversation all got a bit much for one spectator, who interrupted during one of Peter Casey's answers. Byrne had been questioning Casey on whether or not his riches gave him an unfair advantage over the ordinary citizen when a voice from the audience yelled "I've had enough!" The audience member continued to shout over Peter Casey, who seemed to recognise her.

There was originally no plans for an ad break during the show, but Byrne was forced to take the show off air for a matter of minutes.

popular
The JOE Music Quiz: Week 117
QUIZ: You'll need to be razor-sharp to get 100% in this General Knowledge Quiz
The JOE Friday Pub Quiz: Week 307
An exciting Irish crime thriller is among the movies on TV tonight
A great underseen action thriller is among the movies on TV tonight
James May reportedly hospitalised after crashing into wall at 75mph filming new show
Record for hottest August day in Ireland ever has now been broken
You may also like
4 months ago
Ardal O'Hanlon describes moment he was attacked by cleric over Father Ted
8 months ago
Over half of Irish people expect a lockdown between now and Christmas
1 year ago
Joe Brolly "taken off air" during Claire Byrne Live debate on Monday night
1 year ago
Tonight's Claire Byrne Live to ask if it's time for a united Ireland
1 year ago
The Irish Viking, who earns €60,000 each month on OnlyFans, to appear on Claire Byrne Live tonight
1 year ago
Claire Byrne named as new presenter of RTÉ's 'Today' radio show
Next Page