They have until the end of May to clear any Dáil bar tabs.

All unpaid Dáil bar tabs will be automatically deducted from the salaries of TDs and Senators from mid-June onwards.

In a letter from the Houses of the Oireachtas Commission sent to all TDs and Senators, the Dáil bar and restaurant will be introducing a new payment system, which requires all members to complete an application and deduction mandate form prior to making any further purchases on credit. 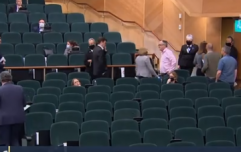 END_OF_DOCUMENT_TOKEN_TO_BE_REPLACED

Coming into effect on 23 April 2018, this credit system was outlined in a letter, titled 'New Credit Facility Arrangement for Bar and Restaurant Purchases'.

It also stated that two months following said date any outstanding debts will be classified as "aged debts", at which point the are automatically deducted from the members salary.

Members have now been informed that any aged debt must be cleared by the end of May, before the mandated deduction option begins for the first time the following month.

The system was introduced after it was revealed in August 2017 that almost €5,500 in unpaid tabs had been written off due to there being "no realistic prospect" of recovering the money, with some of these bills being owed since the year 2000.

The figures, released to the Sunday Times under freedom of information legislation also revealed one TD ran up a tab of over €1,200 for food and drink in the Dáil in July and August 2017, a period in which the Dáil only sat for eight days.

Another TD had an outstanding bill of €1,500 by the end of August that had been unpaid for over two months at that stage.

The Big Reviewski || JOE · The Big Reviewski with Ray Liotta, Goodfellas facts & Tom Hanks making us cry
popular
The JOE Movie Quiz: Week 121
Temperatures to plummet to five degrees with thunderstorms as Atlantic system to hit next week
Ireland's newest train station officially opens in Dublin
The JOE Friday Pub Quiz: Week 262
The 50 most iconic songs of all time* have been revealed
QUIZ: Tickle your brain waves with this general knowledge quiz
PICS: The man with the biggest penis in the world has one unbelievable problem with it
You may also like
3 days ago
Leo Varadkar told he sees "homes as an investment" during heated debate in Dáil
2 months ago
Mary Lou McDonald says indoor dining legislation is “unenforceable and discriminatory”
3 months ago
Ireland becomes first EU country to condemn Israel's "de facto annexation" of Palestine
4 months ago
Dáil approves 10% stamp duty on bulk purchases of ten houses or more
4 months ago
Sinn Féin affordable housing bill passed as Government forgets to vote on its own counter-motion
1 year ago
Dáil resumes as ministers will no longer self-isolate
Next Page