Dublin's dystopia: The age of man is over, the age of hotels is now

Hotel rooms outnumber families by two to one. We fought them off for as long as we could, but once they knocked Liberty Hall to build a hotel which offered discounted rooms to Amazon employees, we were done for.

The majority of people under 40 live in co-living spaces and hubs where they share kitchens and living rooms with dozens of other people. You can't raise families in the hubs, so birth-rates have dropped.

END_OF_DOCUMENT_TOKEN_TO_BE_REPLACED

The Irish public never saw a penny of Apple's tax debt and similar deals were struck with the other tech giants like Facebook and Google. Public transport has been replaced by shuttle buses operated by those companies.

Everywhere you go, you see the Trumpian RONAN GROUP lettering against black hoardings where someone's favourite pub used to be. Permanent reminders of the forces who own the city.

If 1984 or Brave New World taught us anything, it's that even the best works of dystopian fiction are never spot on, but some of them don't miss the mark by all that much. I'll be damned if you can read the above, look me in the eye and rule it out. After all, it's not a million miles away from what's already happening.

Speaking at the Developing Tourism Conference on Monday, Paul Kelly, the CEO of Fáilte Ireland, commented that Ireland was in "desperate need" of more hotels.

END_OF_DOCUMENT_TOKEN_TO_BE_REPLACED

A spokesperson for the organisation later clarified to JOE that the remarks were made "in the context of Ireland losing out on, and not being able to compete for, significant international business events and conferences because of the lack available hotel space".

In different times, we wouldn't bat an eyelid at this idea. Ireland relies on tourism like few other developed nations. As of 2019, tourism generates €7.5billion in revenue and supports the employment of 260,000 people across the country.

There are plenty of things that make Ireland such an attractive destination. Glendalough, for example. Glendalough's very nice. The Cliffs of Moher rarely disappoint. Giant's Causeway; who doesn't love giants? Book of Kells, yeah, fine, whatever boring old monk book floats your boat. Tourists want to see it all and tourists need places to sleep.

Ireland is set to add 5,346 hotel rooms before the end of 2020, which is more than the total of social homes built in Dublin across 2016 and 2017, which came to 4,382. Under the Rebuilding Ireland programme, 1,055 social homes have been delivered Ireland-wide in the first six months of the year.

END_OF_DOCUMENT_TOKEN_TO_BE_REPLACED

Tourists aren't the only ones who need beds, you see, they're just easier to part from their money. Still, it seems an unusual interpretation of the word 'desperate' by the Fáilte Ireland CEO. At the start of 2018, Dublin had 44,677 hotel bed-spaces across 143 hotels. That figure has only gone up in the interim. To suggest we're "desperate" because we can't build another 1,000 by the end of next year seems disingenuous at best.

At worst, it's misleading at a time when thousands upon thousands of Irish people really are desperate. 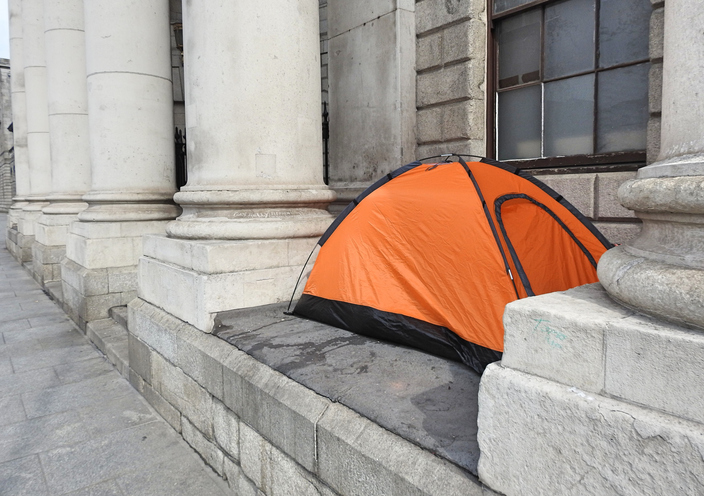 Just one day after we were told by Ireland's tourism body that what we desperately need are hotels, new data confirmed that rents had risen for the 14th quarter in a row. Homelessness figures are, at best, static above the 10,000 mark and the official numbers don't even tell the whole story. Last week, Dublin City Council sold off the O'Devaney Gardens social housing that had been there since the 1950s so that Bartra Capital could make money off 70% of it.

At the same time, cultural spaces have been closing at a prodigious rate — plenty of them specifically for the purpose of building new hotels. Both the Bernard Shaw and the Tivoli Theatre, bastions of Irish nightlife over the past two decades, have fallen in the last year.

For a public body to be scratching at the door to facilitate what would represent a marginal increase in hotel rooms seems ridiculous when Dublin can't even meet the basic requirements of housing supply, or keep well-loved local businesses from closing their doors.

In more recent times, our corporation tax rate - the ultimate céad míle fáilte - has seen tech giants such as Facebook, Amazon, Twitter, Google and LinkedIn set up their headquarters here — bringing with them an influx of highly paid workers who won't be here long enough to buy homes, driving up demand for short-term rentals and starving the overall supply for people who have to live in Dublin, you know, all the time.

In a particularly bizarre invasion of sovereignty, Google has renamed Grand Canal Dock as “Silicon Docks” on its Google Maps app. Granted, it’s not quite “Londonderry,” but these things are a slippery slope and Dublin's soul is on the slide.

For centuries, Ireland has shaped a history and a culture and a heart that has made it one of the most exciting, intoxicating, enriching places to visit for tourists the world over.

The more Ireland sacrifices that heart to multinational corporations and hotel groups, the less of it there will be for anyone to enjoy while they're here.