The DUP had the whole world in the palm of their hands.

When Theresa May squandered her parliamentary majority with 2017's snap general election, the mysterious outsiders with exotic accents were on hand to shore up her minority government for the low, low price of £1 billion.

The position gave them an outsized degree of power in Brexit negotiations. All of a sudden, the fiery obstructionists had become power-brokers. It was a position rarely afforded to Northern Ireland parties, and an opportunity for the DUP to shape Brexit in a way that nobody had foreseen when the referendum was held in 2016.

END_OF_DOCUMENT_TOKEN_TO_BE_REPLACED

UK journalists were caught off-guard. Search engines were flooded with questions about these newcomers (who have been in the House of Commons since 1974) and every publication on earth ran features like 'Who are the DUP? What do they want? Do they believe in evolution?'

More than two years later, the BBC are still producing those same features.

Arlene Foster wasted no time in flexing her new muscles.

The DUP spoke with righteousness about the "blood red lines" they had drawn around their requirements for a Brexit deal. It was tough talk, even a bit scary, but no surprise to anyone familiar with the party who had so staunchly opposed the Good Friday Agreement.

Indeed, just last year, Foster herself told the Telegraph that she did not believe that the Good Friday Agreement was a "sacrosanct piece of legislation."

Now, they speak about the atrocity of a Brexit deal that "drives a coach and horses" through the "sanctity" of that same agreement.

How times have changed.

END_OF_DOCUMENT_TOKEN_TO_BE_REPLACED

Abandoned without shame in Westminster, powerless in Stormont, watching the introduction of abortion and same-sex marriage - policies utterly antithetical to their Paisleyan beliefs. From a position of unprecedented power, they have capitulated into unmitigated catastrophe.

After a week of hard blows across both islands, it seems as though the political power of the DUP could be as extinct as the dinosaurs that they don't believe in.

The DUP, in power, are a terrible powerhouse. They are the most obstinate, uncompromising group of politicians one can imagine. They make Mitch McConnell look like he's hosting a bipartisan barbecue on Capitol Hill. I really don't mean any of that as a compliment but... it still kind of is.

Out of power, they are not the same adversary. They look lost and forgotten, because they are.

To watch Arlene Foster stand up in Stormont yesterday, for the first time in three years, in a vain attempt to block the most basic social progress, will, for many, go down in history as a Ray Houghton moment. "This is not over," Foster said, as the world moved on without her and her party.

'It is not over' says Arlene Foster, as she leaves the Stormont chamber after failing to stop the liberalistation of abortion laws in N Ireland.. pic.twitter.com/xVUKS1bvKo

END_OF_DOCUMENT_TOKEN_TO_BE_REPLACED

The DUP have taken themselves out of power. They have consigned themselves to history. They sat in front of the vanity mirror themselves, painted their faces with clown make-up and jigged around for the UK parliamentarians they yearn so desperately to impress. In the end, Boris betrayed them in a way that any student of British history could have foreseen.

That betrayal speaks to the preposterous degree to which the Conservative and Unionist Party seem to misunderstand their unionist brothers and sisters, and vice versa.

Even now, UK journalists who should know better will tweet about how their lives were better before they'd ever heard of the DUP. Well, excuse you for ignoring a political party that has existed in your parliament for the last 45 years. Thank you so much for leaving us alone to deal with them by ourselves. We're thrilled you've finally had a chance to meet them.

As recently as last week, Mail on Sunday columnist Dan Hodges noted his amazement that Jeremy Corbyn and Arlene Foster could vote the same way on Boris Johnson's deal. It had evidently slipped Hodges' mind that Foster is not an MP, but an MLA, and therefore does not sit in, nor vote in, nor ever have cause to enter the House of Commons.

In 2017, the DUP and the Tories came to agreement without any understanding. Such arrangements are destined to end in tears. 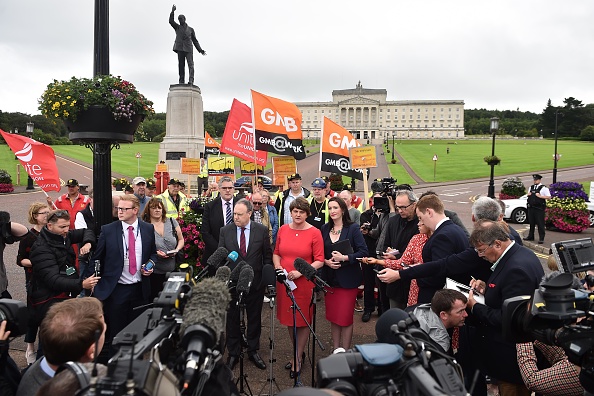 For those of us who have lived our lives paying attention to the DUP, there could be no more fitting end to their time as Brexit kingmakers.

The DUP campaigned against the Good Friday Agreement, one of the most successful peace treaties brokered in modern history. Now, they cling to it as an excuse to say no to a deal that would spare Northern Ireland the worst economic effects of Brexit.

The DUP have refused to budge on the details of Brexit, whether it be on VAT, on the border or on customs regulation — even though the majority of Northern Ireland voted to remain within the EU. Now, they concede that they would sooner back a second referendum that could result in Remain, rather than feel further apart from the union they hold so dear, even though it has betrayed them.

The DUP have used petitions of concern to block same-sex marriage, for which there is popular support in Northern Ireland. Yesterday, they stood in a more-than-half-empty Stormont and pleaded to nobody but God above to strike down the legislation that will see those in the north permitted to marry whomever they love.

The DUP refused to form a coalition government in 2017 because it would not give ground on legal protections for the Irish language, like the right to education through Irish. Thanks to the hard Brexit that they've supported, talk of a United Ireland has increased to unprecedented levels.

In the end, all those years of refusing to compromise have left the DUP in a very compromising position indeed.

popular
QUIZ: How many of these characters from The Simpsons can you name?
Two children, aged 3 and 4, hospitalised after consuming suspected cannabis jellies
Australian woman stuck with Irish accent after tonsil surgery
The 50 most iconic songs of all time* have been revealed
Alastair Campbell accidentally announces death of The Queen live on GMB
Assassin's Creed director on why Ireland is the perfect setting for their new game
PICS: The man with the biggest penis in the world has one unbelievable problem with it
You may also like
2 weeks ago
TD Mattie McGrath compares Ireland to "Nazi Hitler's time" after protest denied by Gardaí
2 weeks ago
Micheál Martin refuses to confirm pandemic support payments will continue past June
3 weeks ago
Robert Watt temporarily waives €81,000 salary increase as new Department of Health role confirmed
1 month ago
Joe Biden's dog Major has bitten another White House employee
1 month ago
Joe Brolly "taken off air" during Claire Byrne Live debate on Monday night
1 month ago
Joe Biden allocates $86 million to rehouse migrant families in hotels
Next Page