Should you fill in your ballot the whole way down? It's up to you

It's PR-STV's time to shine, baby.

One of life's small mercies is that, generally speaking, we get to go roughly five years at a time without thinking about Proportional Representation through the Single Transferrable Vote, Ireland's almost-unique voting system.

The only other sovereign state that uses the same system for its parliamentary elections is Malta. Otherwise, every single other democracy in the world has thought about it and concluded: "Nah, not for us."

How does it work?

Those of you who picked up the coveted A in your CSPE Junior Cert might remember that typically, voters are advised to vote by putting numerical preferences in the boxes all the way down the ballot, from first to last, starting with 1. The 1 is usually easy enough, but it's after the first preference that people tend to lose sight of how the system works.

For a more granular explanation of this process, here are some children:

The pupils at @GlenbegSchool won't be able to vote in #GE2020 but they've got proportional representation with a single transferable vote all figured out. @AislingTM has this explainer for children (and anyone else who needs it!) pic.twitter.com/MIyD5MGmkT

As often happens before a general election, confusion around this system is renewed. As the prevailing political attitudes in Ireland diverge further apart, concern has grown among voters about what their low-down preferences could do for candidates that they specifically want to keep out of power. 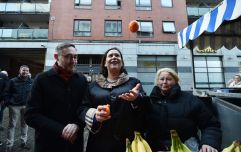 END_OF_DOCUMENT_TOKEN_TO_BE_REPLACED

Put simply, nobody wants to do any favours for the parties and candidates that they don't like. So what is the best way to use PR-STV in a way that reflects your values?

Say, for example, you might be somebody who has no desire to vote for Party X or Party Y. You don't even want to legitimise their presence on the ballot by giving them your derisory bottom two preferences. You'd prefer to leave both boxes blank. No transfers for anybody.

But this is where the idea of preference becomes so important. You might dislike both Party X and Party Y, but if you much prefer one of those candidates over the other (maybe you don't like Party X, but you absolutely cannot stand the idea of Party Y getting in) then your vote can reflect that, and you are given the opportunity to do that by ranking them in order of preference.

The argument for putting a number next to candidates you don't really like is that it could end up making the difference in keeping out somebody that you hate even more.

Still, if you do give Party X a very low preference, there remains a chance that your vote will help them get elected. That's the argument against putting a preference, however low, next to the candidates you don't really like. As long as you put a number beside their name, you could be helping them.

If you find many candidates equally disdainful then you're safe to leave all of their boxes blank and be along your merry away.

Given that PR-STV is so weird, one might ask why we use it?

The easiest answer to give would be that the alternatives are significantly worse.

Of the other systems, first-past-the-post is perhaps the most common, and has the potential to be catastrophically unrepresentative. Hypothetically, in a FPTP system, you could have 100 one-seat constituencies contested by two parties: Red and Blue. The Reds could win each constituency by 51%-49%, thereby winning all 100 seats even though the country is clearly quite evenly split in terms of its preferences.

It has happened in the United Kingdom that parties pick up large swathes of the popular vote but end up with no seats at all.

The public might be 55% pro-milk, but if their votes are spread evenly among the six pro-milk candidates, then it's the two anti-milk candidates who will progress to the final round. This is called the "spoiler effect".

Then of course, there are systems like the US' electoral college, where constituencies are weighted based on calculations regarding things like population. This is only used in presidential elections, but it is also pretty disastrous, and two of the last five elections have seen the candidate with the most votes lose the election.

In light of the other options, trusty-but-tricky PR-STV remains our first preference for now.


popular
Motorist in Kildare caught driving with tax 13 years out of date
QUIZ: How well do you know Will Smith's movie career?
Man (40s) killed after walking in front of oncoming truck after driving into a ditch
QUIZ: How many of these Line of Duty characters can you name?
BBC will show an 'immensely powerful' documentary about The Troubles tonight
Fine Gael preparing to go into opposition following parliamentary party meeting
Over 200,000 people have signed petition demanding change in how media treats those in the public eye
You may also like
5 days ago
Bernie Sanders wins Democratic primary in New Hampshire
1 week ago
PERSONALITY TEST: Which Irish cult hero is your Taoiseach?
1 week ago
Why Sinn Féin's polling lead might not translate into election success
2 weeks ago
Fine Gael's #GE2020 campaign a case study in how NOT to use social media
2 weeks ago
Sinn Féin confirms Mary Lou McDonald's participation in RTÉ leaders' debate, critical of last-minute nature of decision
1 week ago
PERSONALITY TEST: Which Irish cult hero is your Taoiseach?
Next Page