After weeks of herself and Pearse Doherty demanding that they be added to RTÉ's final debate, alongside Micheál Martin and Leo Varadkar, the polls provided them with an unimpeachable case. Top of the polls and a seat at the big kid's table, this is as good as it gets.

But in politics, staying at the top of the polls is like dancing on a pinhead while everybody below you pelts you with rocks. And when things can't get any better, well, they often get worse.

END_OF_DOCUMENT_TOKEN_TO_BE_REPLACED

Within the opening few moments, Leo Varadkar had hit the Sinn Féin leader hard from all angles, painting this new challenger as soft on crime, with a manifesto that's "full of taxes" all during the same brief monologue.

Micheál Martin had his own line of attack, saying that Sinn Féin's climate policy was "akin to climate change denial." Of their manifesto, he said that they had "magicked up the numbers" and that they would "tax businesses out of existence."

All eyes were on Mary Lou. How would tonight's unexpected guest fare with nobody else on stage to absorb the attacks of two seasoned politicians?

"If you ever heard a clarion call of desperation, that was it" began Mary Lou. It was an assured start to begin an opening segment that saw her do her best to avoid giving straight answers on whether or not she would go into government with either of tonight's opponents, and her party's position on reviewing the Special Criminal Court. 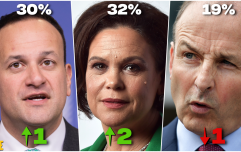 END_OF_DOCUMENT_TOKEN_TO_BE_REPLACED

In some ways, she was fortunate that these issues were dealt with at the outset of the night. With the tricky issues dealt with (by dealt with, I mean dodged), McDonald was in a position to hit the notes that have voters flocking to Sinn Féin in unprecedented numbers.

As the debate began in earnest, it became clear that Mary Lou McDonald and Leo Varadkar bring the best out of each other.

The exchange of the night probably came when Leo Varadkar savaged Sinn Féin's record in Northern Ireland - which, after three years of absentia, is hardly glowing. Varadkar made the argument that Northern Ireland is worse than the Republic when it comes to issues like homelessness and suicide, and that the pension age is being increased to 66 north of the border.

But anyone whose ever seen any of the Rocky movies should have known what was coming next. Because underdogs prepare, and Mary Lou had clearly been beating up the meat carcasses down the butchers or whatever it was Sylvester Stallone did. 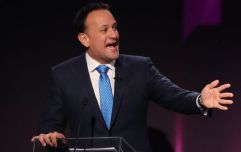 END_OF_DOCUMENT_TOKEN_TO_BE_REPLACED

"Leo should be aware that the island is partitioned, and that the purse strings are held in London," she quipped. Mary Lou, perhaps acknowledging that she won't be the next Taoiseach no matter what, went on to say that the next time Varadkar or Martin meet with the British government that they might press them on this point.

Republicanism? Check. And the mass appeal? Oh yes. Mary Lou will have had some voters whooping on their couches when she criticised "people collecting multiple pensions telling ordinary people they shouldn't get theirs at 65" and slamming Varadkar's attitude towards housing as "condescending."

McDonald would certainly have been with delighted by Varadkar's focus on Martin on both housing and healthcare. Indeed, the Taoiseach was relentless all night, putting in by far his strongest appearance of the campaign so far. He certainly owned the line of the night when he said that "asking Fianna Fáil to take over the economy would be like asking John Delaney to take over the FAI."

Into the final half an hour of the night, this debate was starting to feel like a victory lap for a woman whose party's campaign has exceeded their best hopes.

But the defining moment of the night was yet to come. In a round of questions for each leader about the rogue members in their party (Dara Murphy, Verona Murphy and Maria Bailey for Fine Gael, Niall Collins and Timmy Dooley for Fianna Fáil), Mary Lou faced questions on Conor Murphy.

Murphy had falsely made claims that murder victim Paul Quinn was involved in criminality. Last night, McDonald had told Bryan Dobson that Murphy hadn't made those claims. But Miriam O'Callaghan had the receipts. The revelation stumped McDonald, who had to demur, and ended on the note that the comments shouldn't have been made, and that an apology was on its way to Quinn's family.

It was another high-profile case of McDonald not knowing enough about someone in her party - something that had come to the fore earlier in the campaign when Sinn Féin councillor Paddy Holohan ended up suspended for strange comments he'd made on his podcast about underage girls blackmailing men through sex.

The question seemed to leave McDonald reeling, and her responses during the following segment on climate change didn't come with the same composure that has seen her through this so-short-but-oh-so-long-let-it-end campaign.

When you come into a debate on top, you have one goal - don't fuck it up. Sinn Féin were never likely to jump further up the polls than they currently are, so tonight's mission would simply have been to stay the course.

Unfortunately, the ship's had a leak since Mary Lou's interview with Bryan Dobson, she just didn't know it. How she navigates from here will be the true test of her leadership.

popular
James May reportedly hospitalised after crashing into wall at 75mph filming new show
Disney+ has just added 10 big movies to its library
QUIZ: You'll need to be razor-sharp to get 100% in this General Knowledge Quiz
Netflix has just added an incredibly tense 97-minute thriller
An exciting Irish crime thriller is among the movies on TV tonight
The JOE Friday Pub Quiz: Week 307
A great underseen action thriller is among the movies on TV tonight
You may also like
3 weeks ago
Mary Lou McDonald tells Irish in Australia they have been "robbed of a life in Ireland"
1 month ago
No general election in the near future as Government survives vote of no confidence
1 month ago
Taoiseach says Irish people actually don't want a general election, thanks
1 month ago
Sinn Féin considering tabling no-confidence motion in Government
2 months ago
Support for Sinn Féin on the rise in latest opinion poll
2 months ago
"Partition has been disastrous for Ireland... and for Britain as well," says Mary Lou McDonald
Next Page