Plenty of people who have been in a similar predicament share her pain.

In case you’ve been living under a rock for the last week or so, you’ll be aware that the news has been dominated by the fate of Frances Fitzgerald, who resigned as Tánaiste on Tuesday.

With Fitzgerald being a very common surname in Ireland and Frances not that rare a first name either, it’s no surprise that there are more Frances Fitzgeralds in the country than the former Tánaiste, one of whom was the target of quite a bit of accidental attention today.

END_OF_DOCUMENT_TOKEN_TO_BE_REPLACED

UL graduate Frances Fitzgerald outlined her frustration at her username being tagged in tweets about the former Tánaiste rather than the actual username for the Minister for Business, Enterprise and Innovation, which, of course, is @FitzgeraldFrncs. 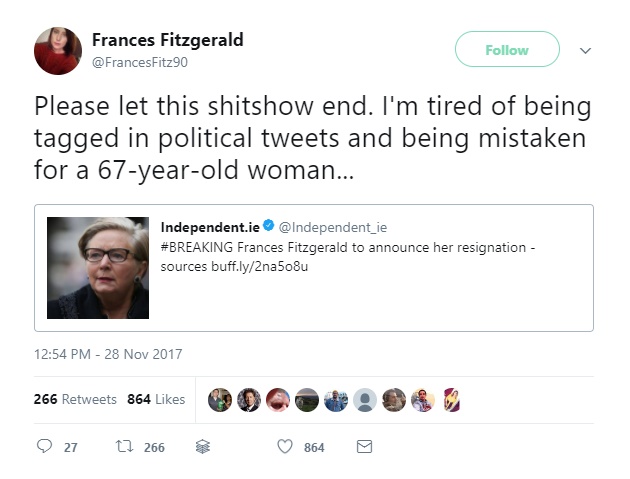 Having complained about her plight on Twitter, Frances received a number of responses from people who have found themselves in a similar predicament, such as Niall Horan, Stephen Donnelly and Micheál Mac Donncha.

Believe me I feel your pain 😆

You have my every sympathy. Every time Stephen Donnelly of Fianna Fáil does something silly my mentions are brutal.

Welcome to my world. Regards, The Lord Mayor 😁😁

Now Frances has an idea of how this guy feels, every single year...

Received a nice package from John Lewis (retail) again as a thank you for handling wayward tweets, including #MozTheMonster and his book, wifi controlled Christmas lights, and a Google Home! Oh, and an edible version of my face! Thanks, @johnlewisretail! pic.twitter.com/tSZYjplcIF