The former President posted a picture of this kind deed on his Instagram page.

It has been a big week for both the worlds of fast food, and American politics.

First we had Donald Trump giving a college football team a crazy amount of McDonald's, and now we have George Bush delivering security men a load of pizza. 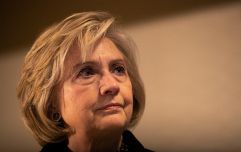 END_OF_DOCUMENT_TOKEN_TO_BE_REPLACED

In an Instagram post, the former President shared a picture of him with a couple of large pizza boxes in his hands. In the photo, he is delivering the food to the Secret Service, who are currently working during the longest US government shutdown in the history of the country.

He also attached a somewhat political message, which is something that he has steered clear of since he left office in 2008.

Bush wrote: "It’s time for leaders on both sides to put politics aside, come together, and end this shutdown."

@LauraWBush and I are grateful to our Secret Service personnel and the thousands of Federal employees who are working hard for our country without a paycheck. And we thank our fellow citizens who are supporting them. It’s time for leaders on both sides to put politics aside, come together, and end this shutdown.

America is now in its 30th day of a government shutdown.

House of Rugby Ireland · Quinn Roux on finding a home in Ireland and Mike McCarthy brings the absolute HEAT!
popular
RTÉ Prime Time footage shows tanned Irish holidaymakers returning from Lanzarote
QUIZ: Can you name all of these countries just from one of their cities?
Holly Willoughby criticises influencer for travelling to Dubai during pandemic
Here are the best movies on TV this evening
Taoiseach Micheál Martin says people need to stop going on holidays
QUIZ: Do you know the collective name for these groups of animals?
Hedge fund requires bailout after Reddit users cause 800% increase in GameStop shares
You may also like
1 year ago
Donald Trump has had an absolute nightmare on Twitter
1 year ago
Donald Trump, aged 72, claims to be "the youngest man"
1 year ago
WATCH: Donald Trump repeatedly say "oranges" when he means "origins"
1 year ago
WATCH: Joe Biden responds to claims he has made women feel "uncomfortable"
1 year ago
WATCH: Kit Harington says that there's a "Joffrey at the head of one of the most powerful countries in the world"
1 year ago
Samuel L. Jackson says he doesn't care if his Trump stance costs him fans
Next Page