Getting one over on the British isn’t helpful to Ireland in Brexit negotiations, says Michéal Martin

Michéal Martin sits in his office on the 4th floor of Leinster House, where the central heating is turned so high he rolls a plastic water bottle across his cheeks to provide some cool relief.

As the year comes to a Dáil close, Martin is here to talk Brexit " the greatest challenge facing the North and South of Ireland" and the 8th amendment to the Constitution of Ireland which places a mother and the "unborn" as equals on the right to life scale.

Martin begins by trying to explain what Brexit is, a deceptively difficult exercise as those who are leading Britain out of the single market, can’t seem to find the words to explain it either.

END_OF_DOCUMENT_TOKEN_TO_BE_REPLACED

Will it be a hard or soft Brexit, inside or outside the single market and the customs union, regulatory alignment or a fudging sleight of hand? Each antonym and every variance in between will have a seismically different impact on Ireland, the UK and the EU. Yet it seems those fuelling Britain’s maiden voyage out of Europe have yet to decide where exactly it is they want to dock.

As a result of this the Irish government’s Brexit offensive has shapeshifted, trying to find advantage in a situation which has brought questions of loyalty, forgiveness and peace to the fore.

‘Tis the season after all.

END_OF_DOCUMENT_TOKEN_TO_BE_REPLACED

The Irish desire to have one over on the British is a ‘natural and instinctive one’ says Martin, leader of Fianna Fáil, whose confidence and supply agreement with Fine Gael keeps Leo Varadkar’s government in power.

"There are elements of the Irish audience that love having one over the British and English - from Houghton's goal on, it's natural, instinctive, it's in our DNA," says Martin. “Without a shadow of a doubt Brexit is the greatest challenge facing the North and South of Ireland…but it hasn’t yet come into Irish consciousness, just how bad it could be”.

"If we don't replace the relationship we have now with UK with something similar, we are looking at thousands of jobs being lost, particularly in agriculture. Irish companies will lose market share in Britain if Britain has cheaper imports from other places in the world and if there is a tariff on Irish goods coming into the UK”.

END_OF_DOCUMENT_TOKEN_TO_BE_REPLACED

Last year Revenue completed a draft report into the potential ramifications for the Irish economy should there be a hard Brexit. “The government tried to suppress that report, we got it published in the end. It’s quite horrendous” says Martin.

Michéal Martin expresses sympathy for David Davis, the UK Brexit secretary who was publicly lampooned after he confirmed that no reports had been conducted to assess the impact of the UK leaving the EU on any sector of the UK economy.  “The media here went kind of gangbusters saying, 'Wasn’t he so incompetent?' But Ireland doesn’t have any sectoral studies published. I really hope they have them done” says Martin.

“I think we should publish how bad it is going to be because that concentrates the mind and changes public opinion,” he says. “I’d be critical of the government in terms of holding that back".

When asked how he thought the negotiations went for phase one of the Brexit talks, Martin was quick to answer. "The challenge in negotiations is to limit the damage”.

But limiting the damage is not something the Irish government seems to have in its outlook or in the subject bar of its communications with the UK.

Leo Varadkar’s muscular approach has been a noticeable feature of the ever lengthening riddle of Brexit negotiations.

The Taoiseach’s early soundbites of ‘seamless’ borders and ‘frictionless’ talks have been forgotten in favour of a more confrontational approach by Varadkar. This was illuminated in his "we're not going to be helping them to design some sort of border that we don't believe should exist in the first place" speech, or in his phrase "it is the British and the Brexiteers who are leaving, so if anyone should be angry it's us quite frankly".

For Michéal Martin, the quieter diplomacy of Albert Reynolds and Bertie Ahern has been forgotten in this era of political announcements being made via Twitter.

“Hopefully lessons have been learned” says Martin of the leaked Brexit deal proposal which saw Theresa May scrambling to bring Arlene Foster’s DUP party back in line, something May wouldn’t have had to do if she had been able to make the announcement herself at lunchtime, observes Martin.

The messy implications of Simon Coveney, Minister for Foreign Affairs and Trade, prematurely appearing on RTÉ’s Morning Ireland to talk about the deal and President of the European Council, Donald Tusk, tweeting about liking Mondays was one which will leave its scars along Irish-British relations.

And with that it became clear that the Irish government’s desire for domestically favourable announcements which position us at the centre of Europe rather than to the left of Britain, is no longer obfuscated by quiet diplomacy.

What has come as a result of the first phase of Brexit talks, is "two irreconcilables" according to Martin. So either the UK has a hard border with Ireland and makes trade deals of its own, or it has a soft border and remains in the single market and customs union, it can’t have both. “What has come from the negotiations” says Martin "is illogical but part of these negotiations is how we help Britain get themselves out of the jam they find themselves in”. 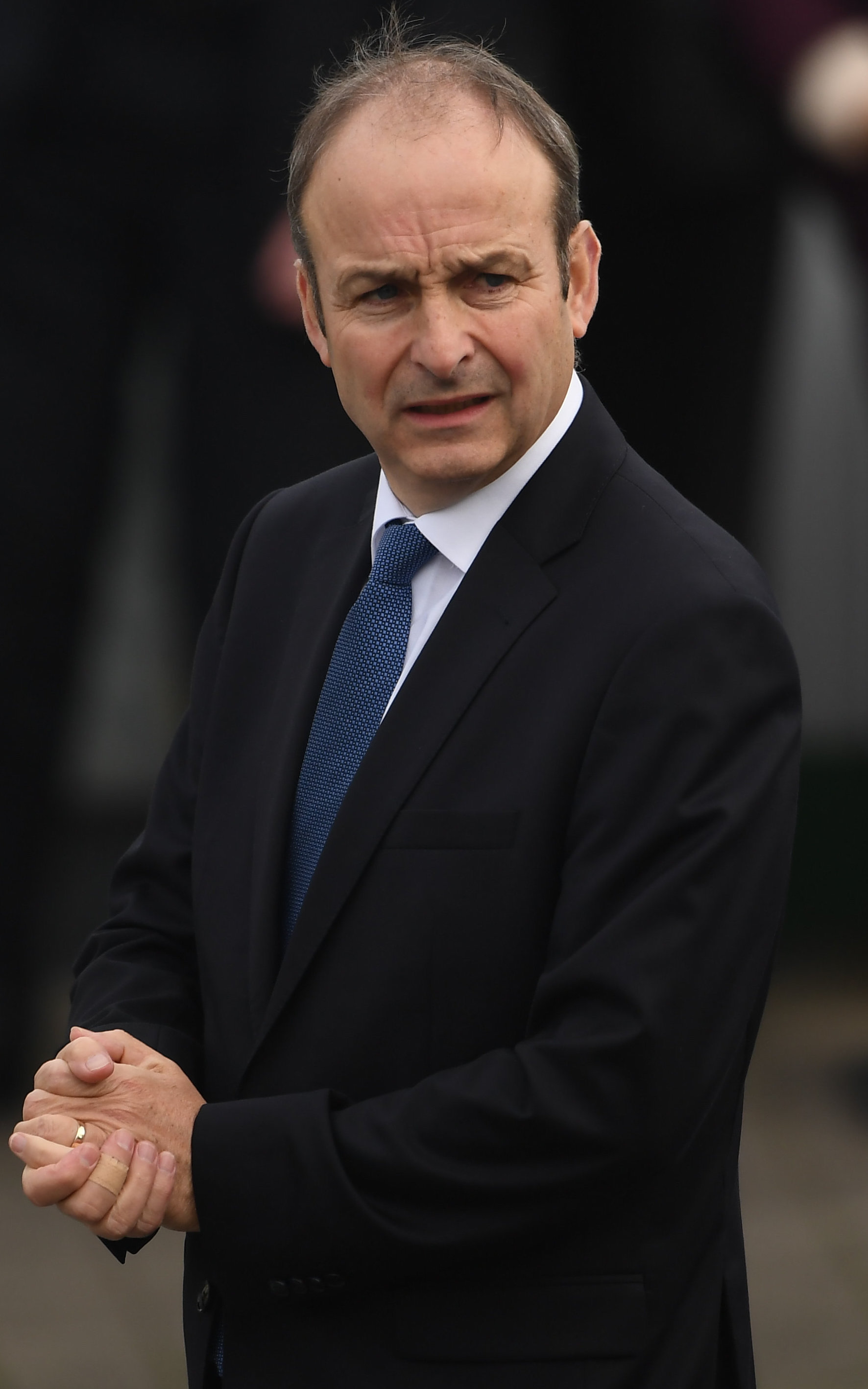 For Michéal Martin the question of a united Ireland should never have been brought into the Brexit debate and it was a mistake to do so. "Sinn Feín used Brexit as a battering ram for Irish unity” says Martin and as a result, unionists in the North are spooked.

In the immediate aftermath of the Brexit announcement, Gerry Adams walked to a microphone and said it was time for a border poll and a “reimagining of a Ireland”.

“Never waste a crisis, never waste a difficulty” said Adams, in an interview with Vice News following Brexit. Citing the Scottish example he commented, "It used to be in Scotland that it was men in kilts with big beards that wanted independence, and then it became a real life issue."

But it was not alone Adams’ Sinn Fein calling for a united Ireland, Enda Kenny called for the “fanciful theory” of a united Ireland to be considered and Simon Coveney and Leo Varadkar have both said they’d like to see a united Ireland in the future. But “the unity question is separate to Brexit” says Martin.

For Michéal Martin the crisis has been the conflation of Irish unity with Brexit. “They are separate questions and instead of a "common sense attitude…parties in the North have gone back into the trenches and gone back into identity politics”.

Although Michéal Martin’s role in this confidence and supply minority government is that of a watchdog; guarding Fine Gael’s majority position for as long as is necessary, events of the past month, forcing Frances Fitzgerald to resign from her position as Tanaíste, have shown that Fianna Fail is prepared to bite its current master when the time comes.

But until that day comes, the two parties that dominated the 1983 referendum on abortion will, 35 years later be the same two to decide the terms and wording of the 2018 referendum on the 8th amendment.

Repeal, replace or reform? After a consensus from the Citizens' Assembly and the Committee on the Eighth Amendment of the Constitution, it would seem almost a given that a referendum to repeal the 8th amendment, will be put to the voting public. But nothing is a given in this debate which has haunted Fianna Fáil and Fine Gael since a Pro-Life amendment to the Constitution was first proposed in 1981.

Martin believes that “people are entitled to be consulted on abortion as it has been quite some time since they were last consulted”.  No one under the age of 53 has had the opportunity to vote on the constitutional ban on abortion in Ireland.

Following on from the Citizens' Assembly and the recommendations of the 8th committee, Leo Varadkar and Michéal Martin will apparently spend the Christmas break looking over the recommendations and testimonies in order to begin to put together the first draft of a referendum on abortion to put to the people of Ireland.

But what the wording of this referendum will be is still to play for and Michéal Martin’s political and personal opinion is an important one.

As party leader he is allowing Fianna Fáil a vote of free conscience on the issue. Traditionally his party has been seen as staunchly pro-life and pro-amendment, but the times are changing and three members out of the five representatives of Fianna Fáil on the 8th committee voted in favour of the committee’s recommendations to allow for abortion for up to 12 weeks gestation without restriction.

When pushed on whether these recommendations would be followed in the drafting of a referendum, Martin said, “You have to remember the committee may not be representative of the entire Dáil”, suggesting that the work of the 8th committee remains preliminary and the real debate would come next.

Following a radio interview earlier this year where the Fianna Fáil leader said that the issue of pregnancy as a result of rape wasn’t “that simple in terms of issues…” and legalizing abortion in such cases wasn’t “a simple yes or no”, Martin clarified his position on abortion in cases of rape, incest and fatal foetal abnormality.

“I think women who are victims of rape and incest should not be forced to carry through their pregnancy. I don't think it is fair that couples who have had terrible news, that they then have to go to Britain and bring back their baby in a coffin, I think that is unacceptable”.

When questioned as to how the Irish government could legislate for abortion on a case by case basis, which presents difficulties in making women prove they have been victims of rape or incest, Martin responded, “there are challenges in terms of legally providing for that”.

When asked again how legislating for abortion this way was possible, Martin answered “this has to be pro-women. It can't be one that seeks to undermine women in any shape or form”.

Martin repeats that this will be an" issue of conscience" and people will vote accordingly. The problem with that is the Irish public can only vote on what is put in front of them by politicians. So after 99 citizens assembled, and a committee of 21 politicians gathered and voted, it seems the first of the last decisions to repeal, replace or reform and the conditions of each, will come down to the Christmas reading of Leo Varadkar and Michéal Martin and their colleagues in cabinet.