It's not easy, being a Green

Eamon's Choice will decide the future of Green Party.

If politics is akin to walking a tightrope, the one that Eamon Ryan and his party may tread could easily become a greased-up skipping rope twirled at either end by Leo Varadkar and Micheál Martin.

The decision would perhaps be easier if it weren't for the fact that the Greens are, well, Green. The climate emergency puts a pressure on them to act, regardless of what it does to their party. Like Kermit the Frog in The Muppets, they may well lament the fact that they are Greens, but it will probably end up, after a period of reflection, being what pushes them into a government with Fine Gael and Fianna Fáil.

"It's not that easy being green;

Having to spend each day the colour of the leaves.

When I think it could be nicer being red, or yellow or gold-
or something much more colourful like that."

END_OF_DOCUMENT_TOKEN_TO_BE_REPLACED

The news that Fine Gael and Fianna Fáil will begin “in-depth, detailed talks” on government formation came on Tuesday evening after a whirlwind afternoon of cancellations, postponements and €150 face-masks.

In an increasingly uncertain world, it is telling that the Civil War political divide between the parties ending after almost a century is actually relatively unsurprising. With both parties self-isolating from Sinn Féin, coalition between the pair was the only really viable option. It seems almost like the confidence and supply arrangement was similar to being given a taste of a bottle of wine by a waiter in a restaurant; after that, was anyone really going to object to him tipping up the bottle? They are still, however, eight seats short of a majority. Enter the other success story of the 2020 General Election: “Both parties will also continue discussions with the Green Party.”

The Green Party, it seems, have finally cast off the stone of shame attached to them after their last, and only, foray into government between 2007 and 2011. They received the same ire that Fianna Fáil, their partners at the time, did in the 2011 election as the country endured a severe economic recession. But they didn't have the seats, or support base, to weather the storm.

"It's not easy being green.

It seems you blend in with so many other ordinary things.

And people tend to pass you over 'cause you're not standing out like flashy sparkles in the water-
or stars in the sky."

END_OF_DOCUMENT_TOKEN_TO_BE_REPLACED

They were simply wiped out in that 2011 poll, and lost all six of their seats as Fine Gael toppled their new best friends and entered power. But could a decision now to join Martin and Varadkar in power see them only, like Homer Simpson, have a much larger ‘stone of triumph’ attached to them in the long run? Would entering government actually be the worst thing the Green Party could do this time around? 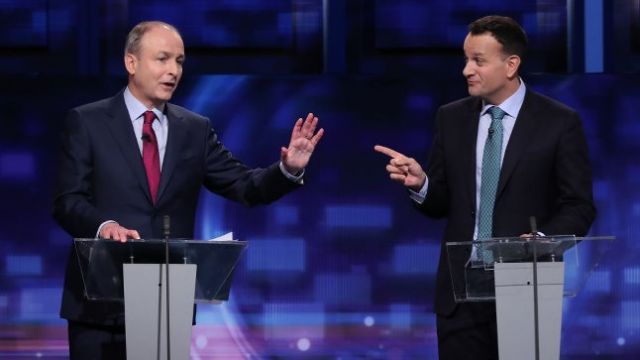 The “vote left, transfer left” mantra seemed to revolutionise Irish politics in 2020. Sinn Féin stormed to the top of the polls in constituencies across the country, but with only 42 candidates running for the party, and huge surpluses to be divvied out, those votes tended to tumble down the ballot to left-leaning candidates.

END_OF_DOCUMENT_TOKEN_TO_BE_REPLACED

Would going into government with the two parties who the tactic was supposed to wipe out in the General Election be an affront to many of those who voted for them? Sinn Féin leader Mary Lou McDonald said as much when asked about the Green Party potentially facilitating a coalition between Varadkar and Martin’s parties.

“I have said publicly and privately to the Greens I think that any move to put Fianna Fail and Fine Gael back together in government is a mistake," she said.

But, on the other hand, the Greens have now been given a solid mandate by the electorate in the last two trips to the ballot boxes; the General Election this year and the Local Elections last year. While the rise of Sinn Féin was the story of the election just past, the veritable “Green Wave” witnessed last year cannot be ignored.

Being kingmakers in a coalition government allows Eamon Ryan and his party to put a real, meaningful climate action plan in place and put environmental concerns to the forefront of their discussions with both parties. It also means that they would be doing so within a stable government that no other two parties, or combination of elected representatives, can provide off the back of the results in February. It becomes all the more important when you consider the climate disaster currently engulfing the world, while everything else is going on.

"But green's the colour of Spring.

And green can be cool and friendly-like.

So, we’re presented with Eamon’s Choice. Should he and his party choose to enter government with Fine Gael and Fianna Fáil, they have the possibility of a five-year term in power to put their climate action plans in place and start to do the work the party has always wanted to do.

However, by doing just that, they face potentially losing the young, left-leaning vote that has been important to their success at the polls in the last couple of outings. It's effectively a choice between doing exactly what the purpose of the party is, when it is needed most, but potentially losing out on long-term political success in the process.

While the Greens hold the Ace card in the talks, how they decide to move forward will determine whether or not it’s high or low.

"When green is all there is to be

It could make you wonder why, but why wonder? Why Wonder, I am green and it'll do fine, it's beautiful!

popular
WWE Tough Enough winner Sara Lee has died, aged 30
The JOE Friday Pub Quiz: Week 315
Welder awarded €15,000 for unfair dismissal despite admitting to drinking alcohol before work
Two arrested and charged over 2021 death of four-year-old boy in Limerick
Mrs Brown’s Boys creator Brendan O’Carroll hits back at "woke" critics
10 years ago today, the scariest movie ever made (according to science) was released
QUIZ: Can you name all the counties in Ireland without the letter 'L'?
You may also like
50 minutes ago
The JOE Friday Pub Quiz: Week 315
1 week ago
Liz Truss gets absolutely skewered on UK local radio over fracking questions
1 week ago
Sinn Féin TD slams Government decision to give "an €830 pay increase to people on €130,000"
2 weeks ago
Details of cash payments and Christmas bonus outlined in Sinn Féin’s alternative budget
2 weeks ago
The JOE Friday Pub Quiz: Week 312
2 months ago
Boris Johnson signs off final PMQs as Tory leader with "Hasta la vista, baby"
Next Page