Clinton has spoken out against Bernie Sanders, who plans on running in the 2020 US presidential election.

A new documentary that will center around Hillary Clinton will soon be released on Hulu.

It will see the former First Lady open up about the Monica Lewinsky controversy, her marriage to Bill Clinton, whether a woman can win the American presidency, and Bernie Sanders.

END_OF_DOCUMENT_TOKEN_TO_BE_REPLACED

And by the sounds of it, she's not the biggest fan of Sanders.

In one scene in the documentary, Clinton says of Sanders: "He was in Congress for years. He had one senator support him. Nobody likes him, nobody wants to work with him, he got nothing done. He was a career politician. It's all just baloney and I feel so bad that people got sucked into it."

When asked in an interview by The Hollywood Reporter whether she stood by her comments, she said: "Yes."

Clinton then seemingly doubled down on her comments about the presidential hopeful, saying that she is unsure whether he would get her endorsement if he is chosen as the nominee. 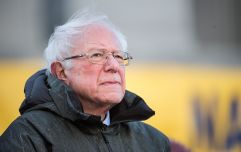 END_OF_DOCUMENT_TOKEN_TO_BE_REPLACED

"I'm not going to go there yet. We're still in a very vigorous primary season. I will say, however, that it's not only him, it's the culture around him. It's his leadership team.

"It's his prominent supporters. It's his online Bernie Bros and their relentless attacks on lots of his competitors, particularly the women. And I really hope people are paying attention to that because it should be worrisome that he has permitted this culture — not only permitted, he seems to really be very much supporting it."

Paddy Power currently have Bernie Sanders at 5/2 to be the Democratic Candidate for 2020, which would make him the second most likely candidate after Joe Biden.

popular
People want "offensive" Crown Paints advert banned after attracting hundreds of complaints
Disney+ has just added 10 big movies to its library
Netflix has just added 23 very big movies to its library
Human remains found in suitcases are the bodies of two children
QUIZ: Can you identify the famous song from the opening line?
A terrific '90s crime drama is among the movies on TV tonight
The 50 most iconic songs of all time* have been revealed
You may also like
1 year ago
Donald Trump "100%" thinking of running for US President again in 2024
1 year ago
Seth Rogen calls Ted Cruz a "motherf*****" for fleeing Texas during crisis
1 year ago
Proud Boys leader has past of working undercover for law enforcement
1 year ago
Joe Biden has been sworn in as the president of the United States
1 year ago
Cori Bush denounces Trump as "white supremacist" to chorus of boos
1 year ago
Donald Trump becomes first US President to be impeached twice
Next Page