The Irish Cancer Society has also called for flavoured vapes to be banned, to protect children from the potential harm of e-cigarettes.

The charity raised concerns that politicians are repeating arguments from the tobacco industry, after being lobbied by vape business groups which include major cigarette companies.

It comes as six people are reported to have died in the US for lung illnesses related to vaping. A number of states are now hoping to ban flavoured vape products, months after Juul, a major company which is accused of targeting young people with flavoured vapes, moved into the Irish market.

END_OF_DOCUMENT_TOKEN_TO_BE_REPLACED

The Irish Cancer Society said it is too soon to know conclusively how safe vape products are. The Irish government is planning to ban the sale of vapes to under 18s through an upcoming bill, but it told JOE that it has no plans to ban flavoured vapes.

Lobby groups for the vape industry have said that they support measures to stop children buying and using e-cigarettes. Vape Business Ireland, the country’s biggest vape lobby group, said it wants to have an “open and transparent” discussion about vape products in Ireland. Its membership includes John Player, PJ Carroll and Philip Morris International.

In recent years, major international cigarette companies have invested more in vaping and have started marketing the products as replacements for combustible cigarettes.

Vape Business Ireland has lobbied a number of politicians, including TDs and senators who are members of the health committee.

Paul Gordon, the policy and public affairs manager for the Irish Cancer Society, told JOE that politicians needed to listen to “both sides” when meeting with vape lobby groups.

Earlier this year, the Irish Cancer Society published a position paper with the Irish Heart Foundation which said that while e-cigarettes were less dangerous than combustible cigarettes, a “health risk remains.”

END_OF_DOCUMENT_TOKEN_TO_BE_REPLACED

Mr Gordon said that the Irish Cancer Society was trying to “tighten up” regulation of vapes.

“Because at the moment, without tighter regulation, this problem could explode - as it did in the US. We really need to act, because Europe will take a while to get its act together [on vapes]” he said.

Juul, which started selling its products in Ireland this year, was recently accused by a US committee of targeting under 18s through visits to schools and campuses. Juul has always maintained that its programmes in American schools were aimed at keeping young people away from its products, and promoting health awareness.

Juul sells a number of flavoured vapes, which the Irish Cancer Society want the government to ban. Juul is a member of Vape Business Ireland. The parent company of Marlboro cigarettes has a 35% ownership stake in the company.

“What we see in the US is that teens are especially attracted to flavours. They’re far more likely to use mango flavours or whatever else, compared to the tobacco flavours. And that’s something that actually attracts a lot of users in the first place,” Gordon said. 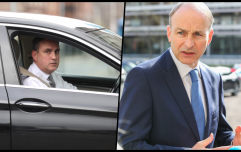 END_OF_DOCUMENT_TOKEN_TO_BE_REPLACED

He said that he did not believe major vape companies when they said they wanted to protect children from e-cigarettes.

“It is a worry. Because not only have they used aggressive marketing campaigns that are undetectable in a way compared to the past, where tobacco advertising was more prevalent, the use of the products are less detectable, which is something that we’ve only really considered in recent weeks,” Gordon said.

Vape Business Ireland has met with Catherine Noone, the Fine Gael senator, a number of times. Earlier this year, Noone called for a national “discussion” on how e-cigarettes could help people to quit smoking, and she said she believed that vapes should be used “as part” of an approach to tackling smoking rates in Ireland.

Noone rejected criticism of politicians like her who have met with vape lobby groups which represent major tobacco companies.

"[It's] insulting to politicians to suggest that we wouldn't have the objectivity to be able to read between the lines." @senatornoone responds to concerns raised by @IrishCancerSoc about politicians "repeating" arguments of tobacco and vape companies after being lobbied. pic.twitter.com/1XMPLJY2nk

“I understand where the Irish Cancer Society are coming from, but that’s sort of to suggest that I wouldn’t have the objectivity to be able to see between the lines, which I can, thank you very much,” Noone said.

“It’s kind of, in a way, insulting to politicians to suggest that we wouldn’t have the objectivity to be able to read between the lines to be honest.”

Vape Business Ireland told JOE that all of its lobbying is recorded on the lobbying register, and said that it was “international organisations such as Cancer Research UK, Public Health England, ASH UK, the American Cancer Society that are calling for vaping to be used as a cessation tool.”

On the issue of sales to people under the age of 18, Vape Business Ireland said that research from the Department of Health showed that  “1% of vapers are ‘never smokers’, illustrating that over 99% of vapers are people who have previously smoked tobacco."

The Big Reviewski || JOE · The Big Reviewski with Ray Liotta, Goodfellas facts & Tom Hanks making us cry
popular
The JOE Friday Pub Quiz: Week 262
BBC reporter covering petrol shortage called Phil McCann
BBC reporter Phil McCann responds after going viral
QUIZ: The Ultimate Movie Gangster Quiz
QUIZ: How well do you know the life and work of Denzel Washington?
Jason Byrne forced to cancel tour dates due to a heart condition
Waterford has been crowned as the best place to live in Ireland
You may also like
6 months ago
Here's the lineup for this week's episode of The Late Late Show
1 year ago
Irish Cancer Society issue urgent appeal for nurses for end-of-life care at home
2 years ago
Rugby stars Andrew Porter & Rory O'Loughlin on how excercise can fight cancer
2 years ago
Survivor Michael Reynolds on the realities facing men diagnosed with breast cancer
3 years ago
How your next morning cup of coffee could help save lives
3 years ago
Irish Cancer Society calls for free gender-neutral vaccinations in 2019 Budget
Next Page