Biden has officially been sworn in the 46th President of the United States.

Joe Biden used part of his inauguration speech to warn against the threat of white supremacy and domestic terrorism.

The 78-year-old was sworn in as the 46th president of the United States of America on a sunny afternoon in Washington DC. 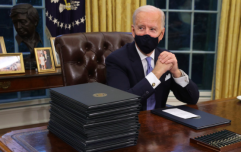 END_OF_DOCUMENT_TOKEN_TO_BE_REPLACED

Guests at the ceremony included pop sensation Lady Gaga, who sang a belting version of the American national anthem.

Before Biden took to the stage, Kamala Harris was sworn in as vice president, becoming the first female VP in the country's history.

Jennifer Lopez was the next guest out, and sang This Land Your Land. Many pointed out that she might have been lip-syncing.

The American singer of Puerto Rican heritage let out a call in Spanish for "libertad y justicia para todos" - freedom and justice for all.

END_OF_DOCUMENT_TOKEN_TO_BE_REPLACED

Then it was Biden's turn. At 11:48am local time, he was confirmed as the next president of the United States. The constitution does stipulate that the official handover time is midday, but nobody is quibbling over 12 minutes. Not even Trump.

Biden said: "My whole soul is in this, uniting our nation."

In his speech, Biden went on to call for unity and an end to "uncivil war". Just two weeks after pro-Trump rioters stormed the US Capitol, Biden said the USA must "confront" and tackle the rising threat of the far-right.

“[There is] a rise of political extremism, white supremacy and domestic terrorism, that we must confront and we will defeat.”
pic.twitter.com/6ZaeGN6g1w

END_OF_DOCUMENT_TOKEN_TO_BE_REPLACED

"The dream of justice for all will be deferred no longer.

"A cry for survival comes from the planet itself. A cry that can't be anymore desperate, or anymore clear now.

"A rise of political extremism, white supremacy and domestic terrorism that we must confront and we will defeat."

Biden's inauguration was not attended by Donald Trump. He became the first departing President not to attend his successor's inauguration since 1869. He instead spoke from a military base, before flying to his home in Florida.