A third image of Justin Trudeau in blackface has been uncovered

The Canadian Prime Minister has since said that he can't remember how many times he wore blackface.

Earlier on Thursday, it was reported that Canadian prime minister Justin Trudeau had apologised for twice being pictured wearing blackface when he was younger.

Since then, a third instance has been uncovered, in the form of a video.

The clip itself is quite blurry, but it has been confirmed to Global News that it is Trudeau in the video.

His face and limbs appear to be covered in black make-up in the video, which you can see here:

He has since said that he is unsure of how many times exactly that he wore blackface.

According to BBC, Trudeau told reporters in Winnipeg: "I am wary of being definitive about this because the recent pictures that came out, I had not remembered,"

Speaking on Thursday morning he apologised for what he called "racist" behaviour: 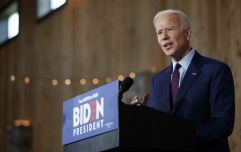 END_OF_DOCUMENT_TOKEN_TO_BE_REPLACED

"I should have known better. It was something that I didn't think was racist at the time, but now I recognise it was something racist to do and I am deeply sorry."

"I have worked all my life to try to create opportunities for people, fight against racism and intolerance,” Trudeau told a televised news conference on his campaign aircraft. I can say I made a mistake when I was younger and I wish I hadn’t. I wish I had known better then, but I didn’t and I’m deeply sorry for it.

"Now I recognise it was something racist to do. For communities and people who live with intersectionalities and face discrimination, it is a significant thing that is very hurtful."

popular
The JOE Friday Pub Quiz: Week 226
Recall of Pedigree dog food over safety concerns
QUIZ: Can you correctly identify these European country flags?
QUIZ: Can you pass your driving test and guess the meaning of all these road signs?
QUIZ: Name all the counties of Ireland that contain 3 vowels or more
QUIZ: Can you guess the drink from its can?
QUIZ: Can you name the Marvel Cinematic Universe film from just a single screen shot?
You may also like
2 days ago
Armie Hammer drops out of Jennifer Lopez film amid social media controversy
2 days ago
Gardaí appeal for information following discharge of a firearm in Clare
3 days ago
US executes first woman on federal death row in nearly 70 years
3 days ago
A woman has died following a car crash in Kerry
3 days ago
A man in his 80s has died following a crash in Tipperary
3 days ago
"Appalling" level of infant death at Mother and Baby Homes, says report
Next Page