It's one of the few ways an inquiry could take place.

Taoiseach Leo Varadkar has told the Dáil during Leader's Questions that former Fine Gael TD Dara Murphy may refer himself to the Oireachtas Ethics Committee for an investigation.

Varadkar said he and Murphy had discussed the prospect of such a move with advisors.

END_OF_DOCUMENT_TOKEN_TO_BE_REPLACED

He had been criticised for claiming his full salary as a TD, as well as parliamentary and travel allowances despite spending large periods of time over the last two years in Brussels as campaign manager for the European People’s Party (EPP).

It was previously reported that Murphy cannot be investigated because he's no longer a sitting TD, but Fianna Fáil leader Micheal Martin outlined an avenue where Murphy can be investigated if he refers himself.

"Under section 9.3 and 9.4 of the Ethics in Public Office Act, there is a facility where former Deputy Murphy could refer himself to the Member’s Interest Committee," Martin said.

Martin asked Varadkar during Leader's Questions if he had asked Murphy to refer himself to the ethics committee.

"Now given all that you have said on this subject over the last while," Martin said, "I want to ask you have you actually asked your former colleague to refer himself to the member’s interest committee under that legislation and if not, will you so do?"

Varadkar confirmed that he knew about the provision and he and Murphy had discussed it, among other options. 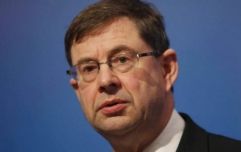 END_OF_DOCUMENT_TOKEN_TO_BE_REPLACED

"I am aware that that provision exists and we’ve had some discussions with him about it," he said.

"I and my advisors have discussed with former Deputy Murphy a number of options as to how an inquiry can be carried out.

"That was one of the options we discussed with him and it is something that is still a work in progress.

"But I think there should be an inquiry and he has already agreed that he will submit to an inquiry and I believe he should pay back any expenses if that inquiry finds against him," Varadkar added.

Varadkar told the Dáil earlier this month that Murphy was willing to co-operate fully with any statutory investigation.