The Fianna Fáil leader told JOE that his party has picked up resentment towards immigrants in parts of the country where people are on long housing lists.

"You say [a new system] as if it's something you could do overnight, I don't think you can do an overnight replacement of the Direct Provision system, if I'm honest," Mr Martin said.

WATCH: Micheál Martin and Danny Healy-Rae had an almighty row in the Dáil

END_OF_DOCUMENT_TOKEN_TO_BE_REPLACED

He said that while racism had not played a part in the general election campaign so far, there was a danger that the housing crisis could be used to incite it - particularly in towns where there has been opposition to Direct Provision centres.

"All political leaders, I think we have a general, genuine collective view that we must try and prevent any racist undertones or any of our colleagues trying to exploit this situation for their own electoral advantage. The housing crisis is the danger here. We do pick it up in some areas. People on housing lists for a long time feel that someone who hasn’t been in the country too long get … that’s coming a bit, and that worries me," Mr Martin said.

"So that's why, for a whole range of reasons, is why we need to get to grips with the housing problem." 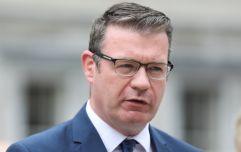 END_OF_DOCUMENT_TOKEN_TO_BE_REPLACED

He said that there had been some improvements to the Direct Provision system and that David Stanton, the immigration minister, had worked tirelessly on the issue.

Direct Provision centres are at capacity at the moment, and over 1,500 asylum seekers are staying in hotels or B&Bs which are being used as emergency accommodation.

Attempts by the government to set up new accommodation centres for refugees in small rural towns have sparked protests and demonstrations. Many community groups have claimed that there has not always been full transparency and consultation between the Department of Justice and small towns or villages. It is understood that the government is also concerned that in some cases, these demonstrations were hijacked by far right activists.

Speaking to JOE as part of a series of interviews with the main political party leaders, Mr Martin said that he believed that some of the demonstrations had been motivated by a "fear of the unknown."

END_OF_DOCUMENT_TOKEN_TO_BE_REPLACED

"And I think there was definitely groups exploiting, in some areas, that fear. And some of it was completely unfounded," he said.

Mr Martin said that he believed that the Department of Justice had probably been "traditional" in its view of how to set up new accommodation centres.

"'Let’s get it in first, and then make it a fait accompli, and we get away with it,' kind of thing. That’s over. You have to be up front and you have to consult with people and say 'here's why we're doing this,'" Mr Martin said.

He said that Ireland can be a very welcoming place when people get comfortable with each other, and there had been "wonderful" stories about refugees integrating and being welcomed around the country.

popular
The JOE Friday Pub Quiz: Week 331
New Netflix series deserves to be as big as Stranger Things
QUIZ: JOE's Big News Of The Day Quiz #39
Couple left mortified after best man delivers incredible punchline during speech
Forspoken breaks the golden rule of gaming... and not in a good way
BBC apologises after calling Paul Mescal 'British' in Oscar coverage
Irish names among the top 10 hardest words for British people to pronounce
You may also like
1 month ago
Leo Varadkar says he'd rather resign than go into coalition with Sinn Féin
1 month ago
The full list of Irish ministers after the big Government reshuffle
1 month ago
Irish peacekeeper dies in Lebanon after convoy comes under fire
2 months ago
Taoiseach among over 50 Irish citizens that have been banned from Russia
2 months ago
'Inspired an entire nation' – Vicky Phelan's family remember their "heart and soul"
2 months ago
"Extraordinary courage and integrity" – Micheál Martin leads tributes to Vicky Phelan
Next Page