Mick Wallace reprimanded over use of word "gobshite" in European Parliament

Mick Wallace, the recently elected MEP for Ireland South, was called to order during a sitting of the European Parliament today.

Wallace was reprimanded after he referred to Venezuelan opposition leader Juan Guaidó as an "unelected gobshite."

"Do you not agree that the recognition of Guaidó is an absolute embarrassment to anyone that has to occupy this chamber, and is a disgrace on the part of the member states of Europe that so many of them have recognised an "unelected gobshite"?

It was quickly note that Wallace would be reprimanded for his use of the word.

Wallace himself shared a video of the moment later on Twitter. 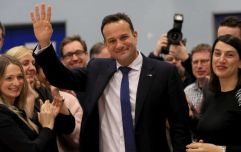 END_OF_DOCUMENT_TOKEN_TO_BE_REPLACED

Guaidó has sought to challenge the leadership of Venezuelan president Nicolas Maduro, with some perceiving his actions as tantamount to a coup.

Guaidó has been supported in his claim to leadership by many EU member states, including France, Germany, Spain and Portugal. The United Kingdom and United States also recognise Guaidó as president of Venezuela, though Maduro remains incumbent.

Ireland is among the countries that officially support Guaidó's claim.


popular
Motorist in Kildare caught driving with tax 13 years out of date
Fine Gael preparing to go into opposition following parliamentary party meeting
QUIZ: How well do you know Will Smith's movie career?
The best places in Ireland for breakfast and brunch have been revealed
BBC will show an 'immensely powerful' documentary about The Troubles tonight
Man (40s) killed after walking in front of oncoming truck after driving into a ditch
QUIZ: How many of these Line of Duty characters can you name?
You may also like
10 months ago
WATCH: Mick Wallace's campaign video is unnervingly intense
3 years ago
PIC: Mick Wallace posted a picture of himself and the man who arrested him on the way to Ireland vs Belgium
4 years ago
Warrants issued for the arrests of TDs Clare Daly and Mick Wallace
5 years ago
Reports: TDs Mick Wallace and Clare Daly arrested at Shannon Airport
6 years ago
European football round up: The year so far in Serie A Part III
6 years ago
Picture: Mick Wallace wearing a Torino jersey in the Dail
Next Page