MILKSHAKING: Why are people throwing milkshakes at politicians?

In recent weeks, there has been an epidemic.

In the lead up to this week's European elections, multiple far-right United Kingdom politicians - including Nigel Farage, Tommy Robinson, and Carl Benjamin - have been the victims of a new form of political action. Specifically, they've been hit with milkshakes.

The milkshakings have come at different times. Tommy Robinson was milkshaked while confronting and interrogating a young man of colour, for example. Benjamin got the treatment while he spoke to the media. In various cities across the UK, the tactic has been repeated.

Much attention was paid to the fact that an Edinburgh McDonald's even refused to sell milkshakes during a visit to the city by Farage, citing advice from the police. Burger King wasted no time reminding customers they could buy their milkshakes there instead, leading to claims from some that BK were inciting political violence.

Wednesday saw the milkshaking protest take its most organised form yet, as Nigel Farage was left on the top deck of his campaign bus, as it had been surrounded by people carrying milkshakes. 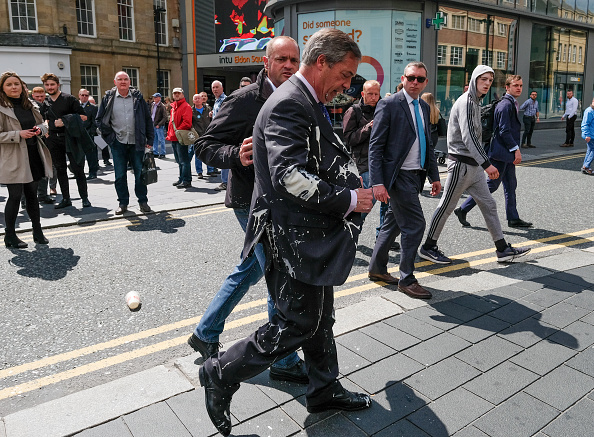 Far-right commentators have attempted to paint the milkshakings as mock-executions, that serve to highlight weaknesses in the security of those who get milkshaked.

This commentary implies that the specifics of such behaviour are meaningless. As if milkshakes have been chosen simply because the throwers couldn't get their hands on more dangerous weapons. It's like saying "Peaceful protests today. Riots tomorrow". There is no proven, or even hypothetical, link between trying to embarrass somebody and trying to kill them.

It cannot meaningfully be claimed that being hit with a milkshake is an act of violence. There is no threat of injury. It's very inconvenient, but in no way prohibitive. If you really had to, you could go about your day even though you'd just been hit by a milkshake. 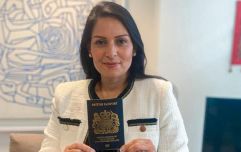 END_OF_DOCUMENT_TOKEN_TO_BE_REPLACED

In that sense, the milkshake is an ideal weapon for combat against the likes of Robinson and Farage, who big themselves up as tough guys prepared to fight for the protection of Britain from immigrants and EU influence. It proves a point when it transpires that these men are not even prepared to continue campaigning after being hit with a milkshake.

It's certainly not a nice thing to do to someone, but the act itself must be viewed in the overall context of today's political landscape.

People like Farage, Robinson and Benjamin are no strangers to violent language.

Following the Brexit referendum, Farage claimed victory for Leave "without a single bullet being fired". Sitting MP Jo Cox had been assassinated by Thomas Mair just weeks earlier. Mair was later found to have purchased far-right publications, and attended the meetings of various far-right groups.

With that in mind, nobody should be less surprised than Farage that angers have bubbled over to the point that people are chucking sweets.

Robinson, on the other hand, is the founder of the English Defence League, known for their militaristic marches through English streets, as well their open anti-Islam sentiment. Robinson has said: "The last thing we want is a war in this country, but it is the inevitable outcome for the way the country is going. Now, the British people are not going to sit back and take much more."

He has repeated this sentiment on multiple occasions, elsewhere saying blaming all English muslims for the 7/7 attacks and pledging vengeance: "Every single Muslim watching this video on YouTube: on 7/7 you got away with killing and maiming British citizens... you had better understand that we have built a network from one end of the country to the other end... and the Islamic community will feel the full force of the English Defence League if we see any of our British citizens killed, maimed, or hurt on British soil ever again."

Robinson is now seeking to be an MEP for UKIP, a party led by Farage for years before he established his new Brexit Party.

The primary talking point around Benjamin, also of UKIP, however, has been his remarks that he "wouldn't even rape" Labour MP Jess Phillips, before following up with "Under pressure, I might cave". Benjamin has since defended these comments as a joke. Benjamin, a well-known YouTuber, has also been known to use racial slurs.

So far, the people targeted are the men responsible for shamelessly reintroducing violence to modern political discourse. For them to threaten violence in the streets in one breath and condemn milkshaking in the other is disingenuous at best.

And besides, didn't your mama ever tell you, Tommy? It's no use crying over spilled milkshakes.


popular
HIQA report finds that official Covid-19 death toll in Ireland has likely been overestimated
QUIZ: Can you name all the countries in the world beginning with the letter 'P'?
QUIZ: Can you get top marks in this tricky logo quiz?
Man arrested in investigation into 25 claims of Covid-19 unemployment payment worth over €56,000
Here’s how you can get 20 bets for €2* for the next EuroMillions jackpot
QUIZ: Name the country for each of these non-capital cities
Five more people dead from Covid-19 in Ireland, 15 new cases
You may also like
1 month ago
The United Kingdom's latest mess would be funny if it wasn't so bloody tragic
4 months ago
A breakdown of the radical new immigration points system proposed for the UK
4 months ago
Northern Ireland's new Secretary of State: "UK government will not be having a border down the Irish Sea"
4 months ago
Julian Smith dismissed as Northern Ireland Secretary
4 months ago
Investigation launched over potential plot to blow up lorry on Brexit day
4 months ago
Massive drop in import of cars from UK to Ireland due to new emissions levy
Next Page