Simon Harris is going to press ahead with 'exclusion zone' law, despite being advised against it by the gardaí

The Garda Commissioner told the government that anti-abortion demonstrations outside hospitals and GP clinics have been "peaceful" so far.

Since abortion became legal in Ireland, anti-abortion activists have held a number of demonstrations outside maternity hospitals and GP clinics. It is understood that anti-abortion activists standing outside an Irish Family Planning clinic have handed women leaflets which promote an unfounded and potentially dangerous "abortion reversal" technique.

The government is behind on its promise to ban such demonstrations by legislating for exclusion zones - which would prohibit anti-abortion protests within a certain distance of healthcare facilities.

END_OF_DOCUMENT_TOKEN_TO_BE_REPLACED

On Thursday, Simon Harris met with a number of politicians to discuss exclusion zones. Ronan Mullen, the independent senator, was the only anti-abortion politician in attendance. The minister showed TDs and senators a letter which he had been given by Drew Harris, the Garda Commissioner which advised against passing an exclusion zone law.

In the letter, seen by JOE, the Garda Commissioner said: "I confirm my satisfaction with existing public order legislation to adequately deal with any reasonable public order incident that may arise at such centres."

Commissioner Harris told the minister that so far, anti-abortion demonstrations outside hospitals and GP clinics have not broken the law and were "peaceful." It's understood that government plans for an exclusion zone law would block the presence of anti-abortion protests within a certain distance, regardless of whether or not they are engaging in public order offences

The Garda Commissioner's letter said that there was "no evidence to suggest that there is threatening, abusive or insulting behaviour directed towards people utilising such services. Consequently, the introduction of any further legislation to ensure 'safe access' to termination pregnancy services, would be redundant at this time." 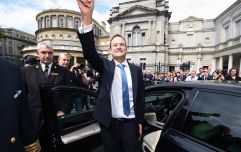 END_OF_DOCUMENT_TOKEN_TO_BE_REPLACED

A government source told JOE that it is still the health minister's intention to legislate for exclusion zones. Mr Harris had promised to bring in a law that would ban anti-abortion protests and demonstrations within a certain distance of any facility providing legal abortion services. Last December, Mr Harris said he would bring forward such a law as a priority, and described such anti-abortion demonstrations as "distressing and upsetting." .

A number of pro-choice politicians had agreed not to try to add exclusion zones to a law which legalised terminations in Ireland, because they understood that the government would legislate for safe access zones as a priority this year. Nine months on from abortion being available at GP clinics and maternity hospitals, there is still no legislation to stop anti-abortion demonstrators from standing outside the clinics. At the moment, an anti-abortion "vigil" is taking place outside the National Maternity Hospital on Holles St, Dublin.

It is understood that at yesterday's meeting, Mr Harris agreed to meet with abortion service providers to discuss the issue of exclusion zones within the next two weeks. Mr Mullen, the anti-abortion senator, asked the minister to also agree with anti-abortion activists. The minister said no. Two sources who were at the meeting said Mr Mullen raised concerns about an exclusion zone law infringing on the right to protest. The Department of Health has said there is no legal advice "against legislating in this area."

popular
QUIZ: Can you conquer this delightfully difficult General Knowledge Quiz?
Met Éireann issues weather warning for three counties
The JOE Movie Quiz: Week 160
A feel-good comedy with a Springsteen soundtrack is among the movies on TV
QUIZ: Take your very best shot in this tough General Knowledge Quiz
An underrated Jason Statham thriller is among the movies on TV tonight
QUIZ: Can you name all of these countries just from one of their cities?
You may also like
1 month ago
Ukrainian students offered grants and subsidised tuition in Irish colleges
1 month ago
Government launches recruitment drive for 27,500 construction workers over five years
3 months ago
Varadkar "not intimidated" by Fine Gael leadership challenges
4 months ago
Ireland's newest university will open its doors in May
4 months ago
Over one-third of female students have experienced non-consensual penetration, survey finds
6 months ago
Booster vaccine dose interval to be reduced to three months
Next Page