After taking a day off, Peter Casey has decided he's still running for President

Peter Casey took a break from his campaign for approximately one day.

Businessman Casey, who is polling at 2%, had a torrid week last week after making multiple offensive comments about the Travelling community and facing criticism from each of his fellow candidates.

On Friday, Casey had said he was "taking the weekend off to think carefully about whether to continue in the race". 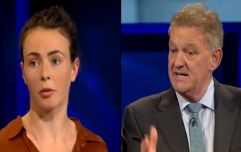 END_OF_DOCUMENT_TOKEN_TO_BE_REPLACED

On Sunday afternoon, Casey confirmed that decided that yes, yes he was.

In an "open letter" sent to various media outlets, Casey said that his experiences over the past one day had inspired him to keep going.

In the letter, Casey said he received "literally thousands of texts, emails and phone calls" pleading with him to remain in the race.

In the subject line, the statement is described as an "open letter" but as of 4:20pm, the letter has not yet been published on his public Twitter page. When it is, you can read it in full there. We won't be publishing it, because it's not the job of news organisations to reprint campaigning documents sent to us by candidates.

Casey is currently polling at last place as election day looms. The public will vote for the next president on Friday 26 October.

popular
Gardaí unveil new Armed Support Unit vehicles to replace older models
Netflix has just added 33 very big movies to its library
The full list of cancelled flights in and out of Dublin Airport on Monday (so far)
One of the greatest crime movies of all time could be getting a sequel
Amazon Prime Video has just added 51 big movies to its library
Increase in passenger charges at Dublin Airport may be on the way
Fish and chips could be removed from Irish menus over rising fuel costs
You may also like
3 years ago
BAI reject all complaints made against Late Late Show interview with Peter Casey
3 years ago
Saoirse McHugh reveals she called Peter Casey before RTÉ debate
3 years ago
Peter Casey deletes controversial cartoon from his Twitter account
3 years ago
"Sick commentary, racist commentary" - Love/Hate creator hits out at critics of new show Taken Down
3 years ago
WATCH: Peter Casey refuses to apologise for Traveller comments and plans to run for a Dáil seat in Donegal
3 years ago
Peter Casey will be on The Late Late Show this Friday
Next Page