QUIZ: Match the Brooklyn Nine-Nine quote to the character

After eight hilarious seasons, Brooklyn Nine-Nine is stopping filming, and as you may imagine, we are a little bit upset.

Because it's legitimately one of the funniest television shows to grace the small screen in YEARS. 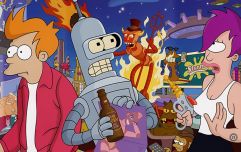 QUIZ: Can you name all these characters from Futurama?

END_OF_DOCUMENT_TOKEN_TO_BE_REPLACED

I mean, how will we survive without Boyle's creepy tendencies, or Terry's obsession with yoghurt, or Holt's love of his dog Cheddar?

Or Hitchcock and Scully's disgusting/adorable bromance? And Gina's extremely unhealthy relationship with her phone?

And that's not even referencing the fact that Jake and Amy are the best TV couple of all time. Yeah, we said it.

They're all just so great.

And if you think you know the force well enough to match 15 hilarious quotes to the character who said them, then you'd better take our quiz and prove it.

Who knows? Prove yourself and you might rise to the rank of Captain in no time.

And if the quiz isn't displaying properly, just click here.

popular
Two Irish cities named the friendliest in Europe by leading travel magazine
Met Éireann has issued a weather warning for seven counties
RTÉ confirms Eoghan McDermott will not be returning to 2FM
The 50 most iconic songs of all time* have been revealed
Happy 25th anniversary to the best mid-movie plot twist of all time
PICS: The man with the biggest penis in the world has one unbelievable problem with it
People think they've figured out the ranking of the viewers on your Instagram Stories
You may also like
6 hours ago
Creators of The Wire returning to Baltimore for police corruption drama
3 days ago
Tensions flare in trailer for new season of F1: Drive to Survive
3 days ago
WandaVision finale isn't perfect, but still ends better than Lost or Game Of Thrones
4 days ago
The hero of last year's Toy Show features in this week's Late Late Show lineup
4 days ago
BBC reveals Season 6 of Line of Duty is coming later this month
6 days ago
All of the best movies and TV shows coming your way in March
Next Page