QUIZ: Can you name every Christmas Number One single from the last 20 years?

You definitely know all of these songs. Time to put your memory to the test.

Earlier this week, Mariah Carey celebrated that her track 'All I Want For Christmas (Is You)' will be topping the charts at Christmas for the first time since its release, but she wouldn't be celebrating that in Ireland, as that honour fell to none other than Lewis Capaldi.

Yep, it would seem that Irish folk aren't too married to the idea of a Christmas song taking the top of the charts coming Christmas time, as is evidenced by the fact that Eminem topped the charts twice in the last 20 years. 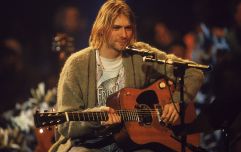 END_OF_DOCUMENT_TOKEN_TO_BE_REPLACED

So what we've done is give your four minutes to give us the song titles for every Christmas Number One single for the last two decades.

And we've even helped out more than usual, by giving you the artist's name, and the year they topped the charts.

The Big Reviewski || JOE · TBR Spotlight: Loki - Episode Two - 'The Variant'
popular
QUIZ: Can you name all these European countries from a list of cities?
The JOE Friday Pub Quiz: Week 248
The 50 most iconic songs of all time* have been revealed
Three men arrested after reportedly attacking staff of premises on South William Street
People think they've figured out the ranking of the viewers on your Instagram Stories
Aer Lingus introduce new fee to bring carry-on bags onboard flights
PICS: The man with the biggest penis in the world has one unbelievable problem with it
You may also like
3 days ago
Government to allocate €25 million in funding to Electric Picnic and other live events
5 days ago
JOE’s Song Of The Day #900 – Phoeno ‘Alive’
1 week ago
Picture This announce details of their only Irish concert dates for 2021
1 week ago
Noel Gallagher calls Prince Harry a "f*****g woke snowflake" in brutal interview
1 week ago
Sinead O'Connor performs u-turn on plans to retire from music
1 week ago
JOE’s Song Of The Day #899 – Emily 7 'Somebody'
Next Page