QUIZ: Name the largest cities in the EU by population

10 minutes on the clock.

Very much a 'say what you see' quiz today as we test your knowledge on that most mouthwatering of subjects... European Union population!

As the quiz itself asks – can you name the largest cities in the EU by population? 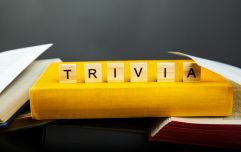 QUIZ: Can you score top marks in this random European trivia quiz?

END_OF_DOCUMENT_TOKEN_TO_BE_REPLACED

We've taken the 20 most-populated cities and listed each relevant figure in descending order. All you need to do is match the city in question to the number beside it.

A reminder that this quiz concerns the 27 member states of the EU and thus the likes of London and Manchester aren't on there because of the whole Brexit thing.

A further hint – some countries appear more than once on this list so don't necessarily give up on that particular part of the world once you've gotten one of the cities based there.

popular
The JOE Friday Pub Quiz: Week 265
Two prisoners who absconded from Loughan House in Cavan arrested by Gardaí
Emergency services rush to high-rise building on fire in Tallaght
Hollywood couple Joe Manganiello and Sofia Vergara seen enjoying a Cork chipper
QUIZ: Can you master this General Knowledge Quiz?
Ryanair is seeking applicants for "the worst job in Ireland"
National Lottery reveals 28 locations where tickets worth over €35,000 each were sold
You may also like
7 hours ago
The JOE Music Quiz: Week 77
1 day ago
The JOE Friday Pub Quiz: Week 265
5 days ago
QUIZ: Michael Collins – the film – is 25 years old but how well do you know it?
6 days ago
QUIZ: Increase your smart levels with this general knowledge quiz
1 week ago
The JOE Music Quiz – Week 76
1 week ago
QUIZ: How well do you know Netflix smash hit Squid Game?
Next Page