Greetings traveler, my name is Falconhoof, and I will be your guide on your quiz.

Maybe he's stuck with his foot in the toilet, or perhaps his head is stuck in a beehive, it may be that he has gotten his tongue stuck to an icy lamppost, or has been squashed by an anvil. 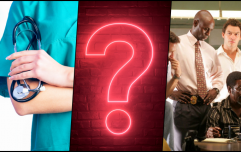 QUIZ: If you get 15/15 in this General Knowledge quiz, give yourself a pat on the back

END_OF_DOCUMENT_TOKEN_TO_BE_REPLACED

My guess, though, is that Rich was trying to chase that damn roadrunner through a tunnel but was, unfortunately, flattened because he didn't realise that the roadrunner had painted a cliff face with an extremely accurate and realistic tunnel facade.

A moment's silence for our fallen comrade. Thank you.

Advertisement
popular
Belgium becomes first nation to introduce compulsory monkeypox quarantine
An underrated Robert De Niro comedy is among the movies on TV tonight
Two men arrested during attempted burglary in Dublin
Tory MP facing drink spiking claims as one fellow politician woke up to find 'nipples being licked'
Met Éireann issue warning for potato blight this week
Coleen Rooney 'confident she's won' Wagatha Christie trial against Rebekah Vardy, according to reports
You may also like
1 day ago
The JOE Music Quiz: Week 105
1 day ago
QUIZ: Get ready for a tricky time with this General Knowledge Quiz
1 day ago
QUIZ: Can you name whether all these Irish towns are west or east of the River Shannon?
2 days ago
The JOE Friday Pub Quiz: Week 295
3 days ago
QUIZ: Can you name all the US States that contain 8 letters?
6 days ago
QUIZ: How well do you remember Ireland's Eurovision entries?
Next Page