Instead, here are the first few lines from Dante's Inferno. Enjoy!

MIDWAY upon the journey of our life

I found myself within a forest dark,

For the straightforward pathway had been lost.

Ah me! how hard a thing it is to say

What was this forest savage, rough, and stern,

Which in the very thought renews the fear.

So bitter is it, death is little more;

But of the good to treat, which there I found,

Speak will I of the other things I saw there.

I cannot well repeat how there I entered, 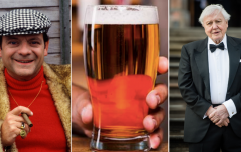 END_OF_DOCUMENT_TOKEN_TO_BE_REPLACED

So full was I of slumber at the moment

In which I had abandoned the true way.

This week's Sport round comes courtesy of JOE's very own Site Editor for Sport Wayne Farry. Why? Because, once again, I ran out of time, hence fucking off the intro. It's a good round though, so thanks to Wayne for bailing me out.