QUIZ: Can you match the one-hit wonder to the artist?

Ah, the one hit wonder.

Sometimes, an artist will just really get it and release a song that remains an earworm forever. 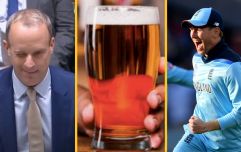 END_OF_DOCUMENT_TOKEN_TO_BE_REPLACED

But whether it's a sudden breakup, a terrible second attempt, or just bad luck, sometimes that one hit will be all they play until the end of time.

We think that some of these artists deserve a bit of recognition, and what better way to do it than with a quiz?

Ten artists are named below, and it's your job to remember the absolute banger they released before fading into obscurity.

All genres and all eras are going to be featured, so you better put on your best music-thinking cap.

Enjoy having the following ten songs stuck in your head for the next week.

If you're having trouble seeing the quiz, you can find it via this link.

Advertisement
popular
The 50 most iconic songs of all time* have been revealed
The JOE Movie Quiz: Week 161
Landlords must give longer eviction notice periods under newly passed legislation
QUIZ: It's time for one of our trickiest General Knowledge Quizzes yet
The JOE Music Quiz: Week 111
Jordan Peterson suspended from Twitter over Elliot Page comment, says he won't apologise
People think they've figured out the ranking of the viewers on your Instagram Stories
You may also like
3 days ago
Radio station plays 'Killing in the Name' non-stop from 6am after multiple staff get fired
4 days ago
R Kelly sentenced to 30 years in prison for sex trafficking and racketeering
4 days ago
Travis Barker rushed to hospital after tweeting "God save me"
1 week ago
Lizzo pledges $1 million for Planned Parenthood and abortion funds
1 week ago
Dave Grohl performs for the first time since Taylor Hawkins' death
1 week ago
We've put together the ultimate playlist for Pride Weekend 2022
Next Page