QUIZ: Can you name the counties in Ireland in order of size, from the largest to the smallest?

This might sound fairly easy on paper, but can you beat the clock?

Ireland might not be the biggest country in the world, but as many people are discovering while sensibly staying at home for their holidays, it’s not exactly tiny either.

Sure, while you could probably travel from the east to west coast in a matter of hours, there are some places where you can spend a couple of hours in a car and still be in the same county as you were when you started, hopefully while lapping up some beautiful sights and sounds along the way. 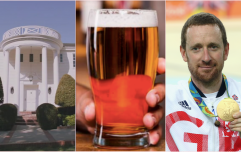 END_OF_DOCUMENT_TOKEN_TO_BE_REPLACED

Plenty of you with an interest in geography will probably have a good grasp of the biggest counties in Ireland and the smallest, but to you we present a bit of a challenge.

Can you name all of the 32 counties in Ireland in order of their size and beat the clock while you’re at it? Again, that might not sound too difficult, but trying to determine the exact order of the counties stuck in the middle ground might cost you a few precious seconds in the quest for full marks.

Just to clarify, the counties below are listed in order of area, the biggest of which has some 6,600 square kilometres to spare over the smallest.

You have five minutes and we've even given you the province each county is located in as hint.

Advertisement
popular
The JOE Friday Pub Quiz: Week 242
Kate O'Connell lays into Fine Gael in explosive Claire Byrne interview
The 50 most iconic songs of all time* have been revealed
"I'm not apologising to anybody." Eoghan Harris calls banned anonymous Twitter account "benign"
Here are the best movies on TV this evening
COMPETITION: Win a star-gazing camping adventure to the stunning Aran Islands for you and your housemate
"Giant" piece of Chinese rocket set to hit Earth this weekend
You may also like
3 days ago
Can you beat your mates in this Ultimate Star Wars quiz?
5 days ago
QUIZ: How well do you know Ted Hastings' one-liners from Line of Duty?
5 days ago
QUIZ: Can you identify which of these countries have the colour yellow in their flag?
6 days ago
The JOE Music Quiz: Week 55
6 days ago
QUIZ: Can you answer all of Davyth Fear's Who Wants to be a Millionaire questions?
1 week ago
The JOE Friday Pub Quiz: Week 241
Next Page