QUIZ: Can you name all the EU countries with a smaller population than Ireland?

Eight countries to name, two minutes to name them.

It's been a while since we tested your knowledge of EU countries. Quizzes on the EU have been very popular with our readers and who are we to deny you of your desires?

Ever since the United Kingdom left, 27 countries now make up the EU. Of the 27, only eight of them have a smaller population than the Republic of Ireland according to Worldometers.info. 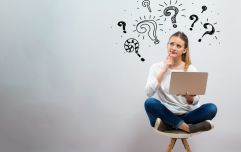 END_OF_DOCUMENT_TOKEN_TO_BE_REPLACED

As of the last Census in 2016, the population of the Republic of Ireland is a little under 4.8 million (4,757,976 to be precise). More recent estimates suggest it's now closer to 4.9 million people, so we make it that there are still eight other countries in the EU with a smaller population than us.

We want you to name all eight EU countries in two minutes or less.

popular
Dublin cinema named best cinema in all of UK and Ireland
Ireland getting "very close to the end of the pandemic", says Immunology Professor
Ireland's rollout "most successful in Europe" as 70% of adults fully vaccinated, says Stephen Donnelly
Italian FA confirm that Lazio youth player Joseph Minala is indeed 17 and not 42
Tony Holohan says Ireland might be in a position "in the coming weeks" to move away from some restrictions
One of the best thrillers ever is among the movies on TV tonight
Dublin pub hit with 'about 50 or 60' fake bookings on first day of indoor service
You may also like
4 days ago
The JOE Music Quiz: Week 67
5 days ago
QUIZ: Test your smarts with this general knowledge quiz
5 days ago
The JOE Friday Pub Quiz: Week 253
5 days ago
QUIZ: Take this short but tricky Irish county quiz
1 week ago
QUIZ: How well do you know your ice-creams?
1 week ago
QUIZ: Give yourself a mental workout with this general knowledge quiz
Next Page