QUIZ: Name every Royal Rumble winner of the past 20 years

We've got a fever.

And the only prescription is... more Royal Rumble. 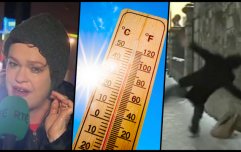 QUIZ: How well do you really know Irish weather?

END_OF_DOCUMENT_TOKEN_TO_BE_REPLACED

That's right, it's Rumble weekend and we're getting in the mood.

This year's edition of the over-the-top rope spectacular takes place on Sunday night (26 January) - details right here, if you're interested - and so we've put together a quick-fire quiz.

Given that it's 2020 and all, we figured '20' was the magic number and thus we are asking you to name every single Royal Rumble winner of the past two decades.

The list runs from Royal Rumble 2000 all the way up until Royal Rumble 2019 and includes both the women's-specific official Rumble matches of the past two years and the 'Greatest Royal Rumble' that took place in Saudi Arabia in 2018.

Five minutes on the clock. Let's do this...

popular
Disney+ has just added 10 big movies to its library
QUIZ: You'll do well to get 100% in this General Knowledge Quiz
QUIZ: How well do you really know Irish weather?
The new Garda uniform has finally hit the streets
The JOE Movie Quiz: Week 167
25 years ago, Sylvester Stallone delivered his best performance in a hard-hitting crime drama
QUIZ: Can you get 10/10 in this Irish sayings quiz?
You may also like
2 days ago
QUIZ: Match The Simpsons quote to the character who said it
2 days ago
The JOE Music Quiz: Week 117
2 days ago
QUIZ: You'll need to be razor-sharp to get 100% in this General Knowledge Quiz
3 days ago
The JOE Friday Pub Quiz: Week 307
4 days ago
The Sweatiest Movie Quiz Of All Time
5 days ago
The Ultimate "That Actor From That Thing" Quiz
Next Page