2024 Europa League final to be hosted in the Aviva Stadium

It will be the second time the Aviva Stadium has hosted the final.

The 2024 Europa League final will be hosted in the Aviva stadium in Dublin, the FAI has revealed.

FAI Chief Executive Officer Jonathan Hill and President Gerry McAnaney confirmed the news after meeting with senior UEFA officials in London ahead of the Euro 2020 final. 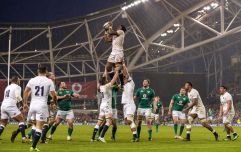 END_OF_DOCUMENT_TOKEN_TO_BE_REPLACED

Hill said in a statement: “This is really positive news, not just for Dublin but for Ireland as we prepare to host such a major football event and showcase the Aviva Stadium and Irish hospitality to the world in 2024.

“We were all disappointed when the Covid-19 pandemic saw the four UEFA Euro 2020 games moved away from Dublin so this really is something to look forward to just three years from now.

"The 2024 UEFA Europa League final will be a landmark event with huge economic benefits for Dublin and for Ireland along with the boost it will give our game in the build-up to the final.

“On behalf of the Association, I want to thank UEFA for awarding this final to the Aviva Stadium and I particularly want to thank the Irish government, Dublin City Council, Sport Ireland and the Aviva Stadium for their ongoing support. Together we are committed to bringing global events to our capital city and we know Dublin will put on a great show in 2024.” 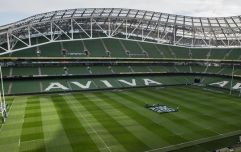 END_OF_DOCUMENT_TOKEN_TO_BE_REPLACED

McAnaney added: “UEFA assured us that the Aviva Stadium would be in the running for a major European final when it became clear that the Covid-19 pandemic would force the abandonment of plans to host the four UEFA Euro 2020 games scheduled for Dublin this summer.

"They have been true to their word and we can all look forward now to a truly magnificent event at the Aviva Stadium in 2024 and one Irish football will be proud of. We look forward to welcoming the best of European football to Ireland in just three years’ time.”

It will mark the second time the Aviva Stadium has hosted the UEFA Europa League final after Porto beat Braga 1-0 in 2011.

popular
Disney+ has just added 10 big movies to its library
25 years ago, Sylvester Stallone delivered his best performance in a hard-hitting crime drama
Why Bran Stark is the true villain of Game of Thrones
The 50 most iconic songs of all time* have been revealed
QUIZ: How well do you really know Irish weather?
QUIZ: You'll do well to get 100% in this General Knowledge Quiz
QUIZ: You'll need to be razor-sharp to get 100% in this General Knowledge Quiz
You may also like
3 months ago
COMPETITION: WIN a pair of tickets to an American Football game in the Aviva Stadium
9 months ago
Westlife add second Dublin gig following huge demand
5 years ago
WATCH: Aviva Stadium belts out a rendition of You'll Never Walk Alone that Anfield would be proud of
5 years ago
The following items will be banned from Robbie Williams' gig at the Aviva Stadium
5 years ago
CONFIRMED: Manchester United are coming to play at the Aviva Stadium in August
5 years ago
PIC: This supporter in the Aviva Stadium last night had no interest in watching the game
Next Page