Okay, the conclusion to La Liga is a lot more interesting to the neutral, but we will do our best to convince you otherwise right here. Includes a Steve Bruce toilet seat and extra helpings of Roy Keane.

If they win, you might get to see that rarest of things, a joyous Arsene Wenger, as he knows he can finally stop hearing about 'major trophy droughts', at least for the next few years anyway.

END_OF_DOCUMENT_TOKEN_TO_BE_REPLACED

On the other hand, if you like the sight of anguished individuals and revel in a bit of schadenfreude then how the French man will react if Arsenal lose to Hull will be a bit of telly you'll want to put on the DVR. You heartless b*stards.

This is how one Hull company chose to commemorate their team's first ever appearance in the Wembley showpiece. 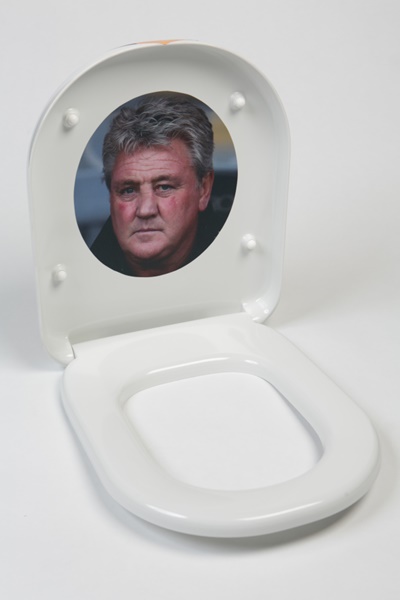 END_OF_DOCUMENT_TOKEN_TO_BE_REPLACED

You wouldn't see that in La Liga.

Sure the Barcelona/Atletico game will see the likes of Messi, Neymar and Diego Costa on the same pitch at the same time but the FA Cup final could feature Paul McShane, David Meyler, Stephen Quinn and Robbie Brady. Where's your patriotic pride?

END_OF_DOCUMENT_TOKEN_TO_BE_REPLACED

Sure you could bill Atletico as underdogs but they are in a Champions League final so they are doing pretty well. Hull though are Wigan-esque in comparison to Arsenal and we all remember what Wigan did last year to City. Plus, remember what Birmingham did to Arsenal in the 2010 League Cup final. If you like the little guy, and think the odds of 6/1 are too big on Hull (which they are, by the way) then stick a few quid on and roar you heart out for David against Goliath.

5. If the heating goes at Wembley, you can watch Hull's Curtis Davies and our own David Meyler fix it. Seriously.

We'd like to see Sergio Busquets and Pedro do this.

In the bad old days, the FA Cup final was a beacon of football joy in a usually dark world where live games of football were rare and what happened in Spain may as well have happened on the far side of Pluto. Sure we all love La Liga these days but the FA Cup final put in years of service to feed your now chronic football addiction. You owe it to them to watch this game.

The game is on ITV (as well as BT) and the coverage led by Adrian Chiles kicks off at 3pm. The game doesn't kick off until 5pm. That's two hours of build-up, where we might get a chance for a bit more screen time for our favourite pundit, Roy Keane. The Corkman's brief appearances before and after Champions League games always leave us wanting more. There should be lots of time to kill at Wembley, so we might get to hear a lot of sense talked before the game, which would make a pleasant change.

And, no offence meant, but we'd rather watch Roy on ITV than Gaizka Mendieta and Ozzy Ardiles on Sky's Spanish coverage.