There's no holding back here...

Earlier this week Cawley slated Rovers' recent form and overall performance in the SSE Airtricty League Premier Division this season, saying: "The manager is there a year-and-a-half and he still hasn't put a stamp on things. When he came into the job I actually thought he would do well. He came in as a very well regarded coach, which was fine.

END_OF_DOCUMENT_TOKEN_TO_BE_REPLACED

"But the problem is that he is not a coach any more. He is the manager and it's a whole different ball game as he is finding out. I look at his interviews week in, week out and it's the same rhetoric every week. He is uninspiring, I feel, listening to him. Shamrock Rovers, at the moment, I don't know where they are going."

Speaking on RTÉ.ie, he also gave Rovers little chance of winning the league.

"I think they are out of the race," he said.

"They might be only nine points off the lead but I think they are out of it. They've only scored 10 goals in 11 home games. This is Shamrock Rovers, arguably the biggest club in the country, it's just not good enough." 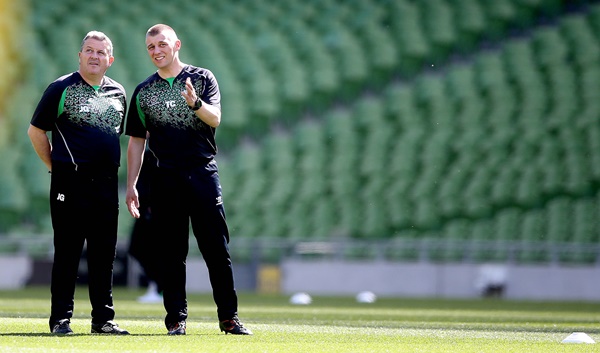 It's fair to say that those comments by Cawley were pretty strong and they haven't gone unnoticed at Shamrock Rovers. Hoops assistant manager John Gill spoke to InTallaght Magazine this week and he was asked about Cawley's comments about Croly being "uninspiring" and the team having "no identity". Gill fired back with some strong words of his own.

"I thought [what he said] was disgusting," Gill said.

END_OF_DOCUMENT_TOKEN_TO_BE_REPLACED

"I could drag a few skeletons out of his closet, I've a few things I could say about Alan Cawley.

"Last year I was managing him at Malahide and he refused to warm up in a game because I'd left him out. Why would you bother listening to Alan Cawley? He wouldn't know much about winning anything, he wouldn't win you a corner.

"And saying he was "uninspiring?" What does he want? A Peter Kay type who's cracking jokes after every match? It's about running a football club and in my view, Trevor is the right man for the job."

We're waiting in anticipation for Alan Cawley's response to that. *JOE puts on some popcorn*

Hat-tip to Stephen Bennett who tweeted the story.

popular
The 50 most iconic songs of all time* have been revealed
Amazon Prime Video has quietly added 10 big new movies to its library
Clint Eastwood's final western is among the movies on TV tonight
The JOE Movie Quiz: Week 130
The best memes from this year's Late Late Toy Show
The Toy Show DJ brothers have been offered their very first gig
QUIZ: Name the films referenced by The Simpsons
You may also like
1 month ago
The JOE Friday Pub Quiz: Week 264
3 months ago
Manchester City's Benjamin Mendy charged with four counts of rape
3 months ago
Michael Ballack’s son Emilio, 18, dies in 'quad-bike crash’
3 months ago
Five football documentaries to watch to kill time before the new Premier League season
5 months ago
Christian Eriksen stable but may not play football again, says sport cardiologist
7 months ago
Martin Compston reveals moment he delayed Line of Duty filming to watch Scotland penalty shoot-out
Next Page