Derry City had a very big win last night, but one picture by INPHO's Huw Evans made us giggle like children this morning.

Last night was a great night for the League of Ireland. Sligo Rovers hammered Banga 4-0 to progress to play Rosenborg in the second qualifying round of the Europa League, Dundalk beat Jeunesse 3-1 to go through 5-1 on aggregate and the hat-tricvk of Europa League success was completed by Derry City, who thumped Aberystwyth Town 9-0 over two legs.

The second leg, played last night in Wales, ended up 5-0 to the Irish side and they will play Shaktyor Soligorsk in the next round. While perusing pictures of the game, which was attended by James McClean, we spotted one rather unfortunate action shot involving Derry's Ryan McBride and Mark Jones of Aberystwyth Town. 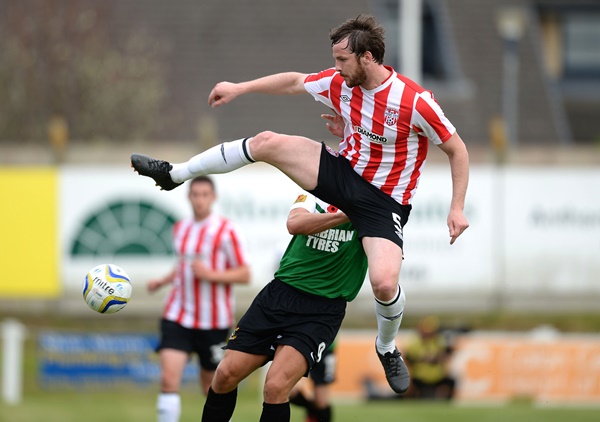 Yes it is childish but after all the Garth stuff we are frankly wrecked this Friday so we are very easily amused today.

popular
One of the best movies of the decade has just been added to Netflix
Cristiano Ronaldo 'agrees £173m-a-year deal' with Saudi club
The latest Star Wars episode is directly based on an IRA funeral
Country singer Jake Flint, 37, dies in his sleep just hours after his wedding
U2 drummer Larry Mullen Jr. says band may perform without him in 2023
20 years ago, one of the best sci-fi movies of the 21st century was a box-office bomb
Katherine Ryan says famous TV star is a ‘predator’ and everyone in industry knows
You may also like
4 days ago
Miss Croatia slammed for raunchy World Cup videos that ‘disrespect Qatar’
4 days ago
World Cup 2022 Day Six: All the major action and talking points
4 days ago
Japan fans explain why they clean up after World Cup matches
5 days ago
The JOE Friday Pub Quiz: Week 322
6 days ago
Japan supporters clean up rubbish following famous win over Germany
6 days ago
ITV football pundit Nadia Nadim heartbroken as mother killed by a truck
Next Page