We don’t want to put the many Premier League Fantasy Football players out there into a bad mood but there is a lad in Sligo who is considerably better than you, and all your friends, at the game.

In fact, Mark Burke from Tubbercurry in Sligo is so good, he’s top of the overall league right now, meaning he is top of a pile that is 2,982,1163 teams high.

END_OF_DOCUMENT_TOKEN_TO_BE_REPLACED

Last week Mark scored a frankly ridiculous 101 points, taking his tally after six weeks to a scary 454 points. If we make it to that number by Christmas we’ll be happy.

Here’s a snapshot of Mark’s current team, if you want follow a man who is clearly a genius at this stuff. 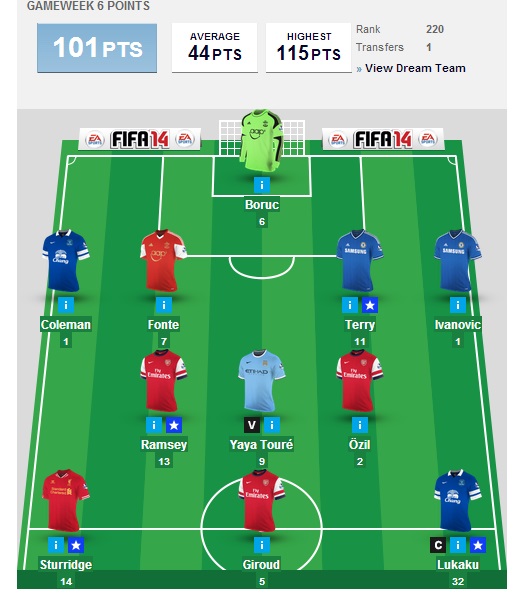 Mark’s feats featured on Ocean FM today and the lads there tell us that Mark doesn’t just spend his time pouring over cold, hard football stats.

END_OF_DOCUMENT_TOKEN_TO_BE_REPLACED

A former Sligo hurling captain, Mark also plays football for Tubbercurry and he will be lining out for them against Tourlestrane in the Sligo senior final this weekend.

We assume he'll be checking the scores of West Brom v Arsenal at half-time on Sunday.

Best of luck Mark, hope you can keep it up for the next 32 weeks.

popular
Welder awarded €15,000 for unfair dismissal despite admitting to drinking alcohol before work
Netflix has just quietly added 30 big movies to its library
Man in his 40s dies following assault at funeral in Kerry
23-year-old Irishman killed in action in Ukraine, family confirms
Amazon Prime Video has just added 37 big movies to its library
One of the best dramas of the 2010s is among the movies on TV tonight
10 years ago today, the scariest movie ever made (according to science) was released
You may also like
1 month ago
Roscommon GAA confirms investigation into alleged assault on referee during juvenile game
2 months ago
Looking for a hotel room for the All-Ireland Final weekends? It won't come cheap...
3 months ago
Taoiseach condemns "disturbing" fight at Galway v Armagh game
4 months ago
The 2 Johnnies share unbelievable catfish ordeal affecting over 40 people
4 months ago
Limerick hurler arrested following alleged altercation with Tipperary player in Limerick pub
5 months ago
Woman in her 20s dies after accident during Camogie match
Next Page